A few recent Campaign updates from Treatment Action Group and allies.
Contact david.branigan@treatmentactiongroup.org for more information on how to be part of the 1/4/6x24 Campaign. 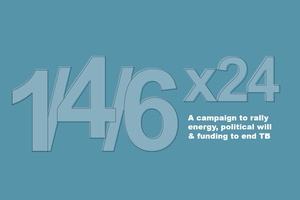 TB advocates around the world have gone all-in on the 1/4/6x24 Campaign! The Campaign’s goal is for country governments, global health actors, and other duty bearers to take steps necessary to make newer, shorter TB regimens available to everyone who needs them: one month (or once weekly) for TB prevention, four months for drug-sensitive TB, and six months for drug-resistant TB – by the end of 2024. Here are a few recent Campaign updates from Treatment Action Group (TAG) and allies:

The new regimens demanded by 1/4/6x24 were borne out of decades of investment in research and are shorter and less toxic. But most people affected by TB still lack access to these regimens, and engaging communities will be key to changing that. With input from the 1/4/6x24 Campaign Coalition, TAG created free community campaign training materials to support civil society and community groups to develop advocacy strategies and generate demand for the 1/4/6 regimens and accountability for the “staff, stuff, space, systems, and support” needed for everyone, everywhere to benefit from access to the shorter regimens by the end of 2024.

There is no better time for TB-affected communities to mobilize: as the Global Fund kicks off a new funding model this year, plans are already being laid at the country-level to update National Strategic Plans (NSPs) and develop funding requests for the upcoming grant cycle. Community allies can influence this process with help from these advocacy guides from the Global Fund Advocates Network, and fight for 1/4/6x24 by applying pressure to their governments to prioritize shorter regimens in NSPs and funding requests.

Over the past month, advocates celebrated two major steps forward: (1) Viatris, MedAccess, and the TB Alliance announced a significant price reduction for pretomanid, a component of the six-month cure for drug-resistant TB (called BPaL[M]); and (2) full guidelines for the BPaL[M] regimen were published by the World Health Organization, removing yet another barrier to widespread policy change and implementation at the national level. The 1/4/6x24 Campaign continues to target such barriers elsewhere, through actions like calling on Johnson & Johnson to withdraw its secondary patents on bedaquiline, a core component of the six-month cure.

Finally, several members of the Campaign Coalition have published a correspondence in Nature Medicine, outlining the urgency of 1/4/6x24 and discussing how duty bearers can best contribute toward securing the human right to benefit from scientific progress for all people living with and at risk of TB. You can read it here.

Join the 1/4/6x24 Campaign! Contact david.branigan@treatmentactiongroup.org for more information on how to be part of the Campaign.