A report highlights that despite reaching US$1 billion in spending in 2021, funding for TB R&D is a mere fraction of what’s needed to achieve UN sustainable development goal of ending TB as a pandemic by 2030. 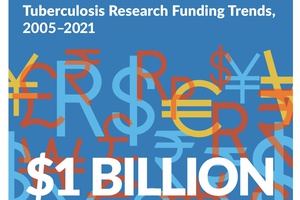 New York | December 6, 2022 – For the first time in history, funding for tuberculosis (TB) research and development (R&D) hit a billion dollars worldwide in 2021. This marked a significant milestone that nonetheless falls significantly short of what’s needed to stay on track to end TB, according to a new report released today by Treatment Action Group (TAG) and the Stop TB Partnership.

The report Tuberculosis Research Funding Trends, 2005–2021 highlights that despite reaching US$1 billion in spending, funding for TB R&D is a mere fraction of what’s needed to achieve the United Nations sustainable development goal of ending TB as a pandemic by 2030. Every day, 4400 people continue to die from TB, a treatable and curable airborne infectious disease.

“We're proud that two decades of activism and scientific advances have led to this unprecedented level of funding for TB research," said TAG Executive Director Mark Harrington, "but we remain disappointed at the pandemic inequity that holds back progress on TB diagnosis, prevention, and treatment. This number must grow to US$5 billion per year."

To meet the 2030 deadline, governments and duty bearers must commit more resources to the fight. The United Nations High-Level Meeting on TB in 2018 set the target of US$2 billion per annum for R&D. After years of chronic underinvestment and devastating disruptions caused by COVID-19, the Stop TB Partnership’s Global Plan to End TB, 2023–2030 estimates the funding need for TB R&D to have gone up to US$5 billion per annum.

“I don’t want to celebrate anything. We have reached US$1 billion, but this is far from what is needed to make a serious difference without the US$5 billion annually as outlined in the Global Plan to End TB, 2023–2030,” said Dr. Lucica Ditiu, Executive Director of the Stop TB Partnership. “We should put fundraising efforts in motion and identify smart financing approaches to advance research, develop point-of-care diagnosis, deliver shorter treatments, and get a new TB vaccine by the end of 2025.”

The report reveals that TB R&D funding increases in 2021 were driven mostly by investments in operational and epidemiology research and in diagnostics development. Seventy percent of TB R&D funding came from public entities, with the U.S. National Institutes of Health providing the largest single allocation at US$354 million. However, none of the G7 countries have met their fair share target (defined as 0.1% of overall R&D spending going toward TB research,) with only three countries surveyed—Ireland, the Philippines and South Africa—meeting this benchmark. Philanthropic spending reached US$140 million worldwide, with 81% coming from the Gates Foundation. Private sector funding lagged at US$102 million, well below its peak of US$145 million a decade ago.

Concerningly, a mere 12 percent of overall spending was on TB vaccines. Without new vaccines against TB, the epidemic will not be stopped. Developing and delivering new TB vaccines in the next decade is within grasp—on the precondition that adequate financing for research is made available without delay.

The billions needed to mount a robust global TB response exceed what’s been invested in TB to date, but they're little more than a rounding error compared to investments made on SARS-CoV-2 R&D in the past three years. “TB is an airborne disease. That means if I’m at risk, you’re at risk,” said Stephen Anguva Shikoli, the National Coordinator of the Kenya Network of TB Champions and Director of Pamoja TB Group. “If we have new innovations, if we have new tools, if we have [a] new vaccine, we will be able to reduce delays in diagnosis and TB deaths around the world."

Treatment Action Group (TAG) is an independent, activist, and community-based research and policy think tank committed to racial, gender, and LGBTQ+ equity; social justice; and liberation, fighting to end HIV, tuberculosis (TB), and hepatitis C virus (HCV). TAG catalyzes open collective action by affected communities, scientists, and policymakers to ensure that all people living with or impacted by HIV, TB, or HCV – especially communities of color and other marginalized communities experiencing inequities – receive life-saving prevention, diagnosis, treatment, care, and information. We are science-based activists working to expand and accelerate vital research and effective community engagement with research and policy institutions for an end to the HIV, TB, and HCV pandemics.

The Stop TB Partnership is a unique United Nations hosted entity based in Geneva, Switzerland, committed to revolutionizing tuberculosis (TB) space to end the disease by 2030. The organization aligns more than 2,000 partners worldwide to promote cross-sectoral collaboration. The Stop TB Partnership’s various teams and initiatives take bold and smart risks to identify, fund and support innovative approaches, ideas, and solutions to ensure the TB community has a voice at the highest political levels and that all TB-affected people have access to affordable, quality, and people-centered care.