To end HIV/AIDS and TB, we need to ‘equalize’ global commitment, financial resources and attention between the two diseases. 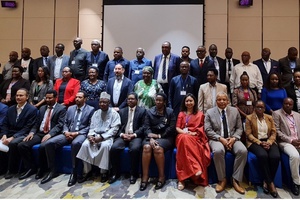 Geneva, Switzerland, 1 December 2022: As we mark this year’s World AIDS Day, the Stop TB Partnership is sending out an important appeal for an equal level of responses to tackle HIV-AIDS and Tuberculosis (TB). The international community is not yet on track to end AIDS, or achieve the United Nations Sustainable Development Goal 3 (SDG3) on health.

Unfortunately, the international community is also not on track to end TB, another deadly infectious disease that has been around for centuries. Both AIDS and TB are preventable and global efforts in fighting them can be put back on track to achieve the 2030 targets of ending these diseases if a few essential measures are taken.

Today the Stop TB Partnership has added its voice to the thousands of others calling to “equalize” the responses against AIDS and TB which would be an essential action to save lives and give hope that we, in our lifetime, will live in a world without TB and HIV.

On behalf of the millions of people affected by TB who are unreachable to health services and who remain undiagnosed, untreated, stigmatized, isolated and discriminated against, we call for equalization of access to quality services and new tools, equalization of rights of people with TB and those most vulnerable and marginalized. We call to equalize the level of attention, funding and high-level commitment to HIV and TB responses.

TB, an airborne pandemic more than thousands of years old, is on the rise. Newly released data by the WHO indicates a worrying upward trend that shows TB incidence growing for the first time in two decades, and the number of people that die of TB increasing for the second year in a row (WHO 2022 Global TB report). In 2021, 7.7% of people with TB globally and 20% in Africa were People Living with HIV (PLHIV). An estimated 187,000 PLHIV died due to TB in 2021, out of which 136,000 deaths (73%) were in the African Region.

“Recognizing TB as the biggest killer among infectious diseases and the most common cause of death amongst PLHIV, while being fully preventable, we call for increased attention, commitment, and resources for TB in order to equalize the responses against HIV and TB,” said Dr. Lucica Ditiu, Executive Director of the Stop TB Partnership.

“TB has never been the media darling nor on in the spotlight of donors or even of high-level stakeholders from national governments. Sadly, TB programmes always operated with reduced budgets, usually covering less than 40% of what was needed. The situation is extremely difficult in the African region where domestic resources invested in the TB responses are reduced to 4-7% of budgetary needs. No targets nor commitments can be achieved with this kind of investment. But even more terrible. These reduced financial resources lead to the biggest inequalities and discriminations and stigma, as millions of people among the most vulnerable and disadvantaged have no access to basic TB response services, such as diagnosis and treatment”, she added.

In 2021, 4.17 million people with TB were not reachable by health services. Out of those 1 million were living in Africa. The situation cannot be accepted anymore, and efforts must be done to increase the resources available from donors, domestic investments, and innovative measures. Efforts must be implemented to properly plan and utilize the available resources to reach more people and increase access to TB diagnosis, prevention, and treatments in smart ways.

Efforts must be undertaken to ensure that Heads of states and governments are aware that TB which is curable and preventable, continues to kill their citizens, and affects their economies through the high fatality rate of those sick and not treated. Affecting mainly populations of economically productive age groups (between 20-45 years old) and the snowball effect of any airborne pandemic in which undiagnosed and untreated people can infect many others.

To address some of these aspects in the most affected region, Africa. The Stop TB Partnership, together with the Africa Constituency Bureau, African Union, and WHO organized a two-day meeting to discuss national efforts to end TB in Africa. The meeting focussed on ambitious planning, and financing, including the upcoming new funding cycle of the Global Fund, new tools for TB diagnosis, treatment, and prevention, and smart investments for TB-affected communities.

Participants stressed the importance of improved political commitment and domestic financing for TB and support to countries for Global Fund TB grant application for the 2023-2025 funding cycle. Noting that Twenty-five (25) of the 49 countries with the highest burden of TB, drug-resistant TB, and/or TB/HIV are in the African Region and that ending the TB epidemic is a target under the Sustainable Development Goals (SDGs) and the 2018 United Nations High-Level Meeting on TB (UNHLM), the meeting agreed to issue a communique. The meeting requested the African Union, Stop TB Partnership, and other partners to coordinate the development of a Common Africa Position for the upcoming UNHLM on TB in 2023 and ensure high-level participation in the UNHLM meeting.

At the end of the two-day meeting, the participants called for equalizing the TB and HIV responses and securing that TB response receives similar funding, visibility, political commitment, and representation on key decision-making platforms, including in the Country Coordination Mechanism (CCM) of the Global Fund.

“Our main focus has been on HIV whereas TB has not received similar attention. As a result, TB is seen as a lesser problem which is not correct. It is time now to bring TB at the same level as HIV so that we can increase the resources and actions for TB in a harmonized work plan at the country level,” said Dr. Diana Atwine: Principal Secretary, Ministry of Health, Uganda.

"Reach all people living with HIV with TB Preventive Treatment to accelerate the reduction in TB incidence and mortality’. Investment in the integration of TB and HIV specimens’ transportation facilitates the attainment of Universal coverage with TB drug susceptibility testing,” said Dr. Rhehab Chimzizi: National TB and Leprosy Programme, Ministry of Health, Zambia.

"We can end TB. We can end HIV. We can reach the SDGs. We can do it only together. We need to care, we need to focus, we need to equalize,’’ said Chief Austin Obiefuna, Vice Chair of the Global Stop TB Partnership Executive Board.