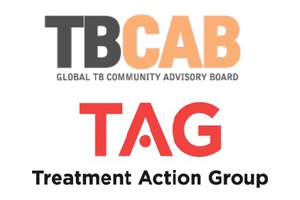 November 16, 2022 – Treatment Action Group (TAG) and the Global Tuberculosis Community Advisory Board (TB CAB) welcome the clinical trials results recently published and presented during the 2022 Union World Conference on Lung Health, which evaluated shorter regimens and treatment shortening strategies for drug-sensitive and drug-resistant tuberculosis. “Attending a conference where there are data presented from multiple phase III randomized controlled clinical trials is a newer and long overdue experience in TB, and a far cry from where we were in 2011 when the TB CAB was first founded and global investments in TB research and development totalled just US$650 million,” said Patrick Abgassi, Chair of the Global TB CAB.

Treatments currently used for TB are lengthy and difficult to endure, which leaves patients vulnerable to treatment disruption from stockouts, severe side effects, financial hardship, and more. The potential to reduce patient suffering and increase rates of successful treatment outcomes makes shorter, less toxic treatment regimens a top priority for TB-affected communities. Over the course of the last two decades, investments in research and development have dramatically altered the landscape for treating TB infection and disease, delivering one-month and once-weekly regimens for TB prevention, four-month regimens for drug-sensitive TB, and six-month regimens for drug-resistant TB – regimens that the civil society-led 1/4/6×24 Campaign calls for governments to implement by the end of 2024. The trials more recently published and/or presented answer several long standing questions and validate existing treatment policies.

Above all, these results underscore the importance of conducting rigorous clinical trials and evaluating a variety of approaches to further optimize TB treatment regimens (with a focus on more than just duration), especially given that a single approach cannot meet the needs or preferences of all TB-affected persons or communities. The wide variety of patient types and characteristics, ability to tolerate certain side effects, and other needs and preferences require a diversity of treatment options, and rigorous research to better understand these differences, especially with respect to patient needs and preferences.

However, in regards to the STREAM-2 results on the six-month, injectable-containing regimen, TAG and the TB CAB take a firm, unequivocal position that injectable-containing regimens have no place in modern, evidence-based TB treatment, even if given for just two months. The only exception to this position is the use of injectable agents as part of salvage regimens for people with no other treatment options. TB-affected communities have clearly called to “cap the jabs”, and we will not allow the progress made on this front to be rolled back. While STREAM-2 showed the theoretical benefit of an injectable-containing, six-month regimen, any percentage of unnecessary, avoidable treatment related adverse events, especially those that can cause permanent disability such as hearing impairment or loss is unacceptable to us.

STREAM 2 serves as the phase III registrational trial for bedaquiline for the U.S. Food and Drug Administration (FDA) and the European Medicines Agency (EMA), and was the first, large randomized controlled trial for multidrug-resistant TB, especially noteworthy given that STREAM was designed during a period of very weak and limited evidence and reliance on expert opinions for policy making in TB. The STREAM trial built clinical trial site and community engagement capacity, and provided important data, including to confirm (in the context of a randomized controlled trial) that the nine-month regimen could be converted to an all-oral regimen using bedaquiline. These and other data collected via STREAM 2 are important contributions to the field, despite other advances in the evidence-base and standard of care for MDR-TB that occurred in parallel to the trial.

As the evidence base and treatment landscape continues to evolve, TAG and the TB CAB encourage continued investments in rigorous randomized controlled clinical trials including all populations who encounter significant TB infection and disease. We also encourage the rapid translation of science to policy and uptake of evidence-based interventions, but with careful consideration given to proven benefits vs. potential for continued harms to TB-affected communities, especially when safer alternatives exist (as is the case with the six-month injectable-containing regimen from STREAM 2). Such consideration underlies equitable access to the best available regimens for everyone, everywhere as a human right (the central demand of the 1/4/6×24 Campaign), and is critical to informing how we prioritize trade-offs and other decisions in the next generation of regimens we design and test.

Treatment Action Group (TAG) is an independent, activist, and community-based research and policy think tank committed to racial, gender, and LGBTQ+ equity; social justice; and liberation, fighting to end HIV, tuberculosis (TB), and hepatitis C virus (HCV). TAG catalyzes open collective action by affected communities, scientists, and policymakers to ensure that all people living with or impacted by HIV, TB, or HCV – especially communities of color and other marginalized communities experiencing inequities – receive life-saving prevention, diagnosis, treatment, care, and information. We are science-based activists working to expand and accelerate vital research and effective community engagement with research and policy institutions for an end to the HIV, TB, and HCV pandemics.

The Global TB Community Advisory Board (TB CAB) is a group of research-literate, community-connected activists from around the world that act in an advisory capacity to product developers and institutions conducting clinical trials of new TB drugs, regimens, diagnostics, and vaccines, and provide input on study design, early access, regulatory approval, post marketing, and implementation strategies. The TB CAB is dedicated to increasing community involvement in TB research and access to tools to fight TB and to mobilizing political will.