The Call to Action calls on the G20 member countries to ensure continuity of high-quality treatment, care and support services and programming that address the needs of the most affected and vulnerable populations, for a more efficient and effective TB response. 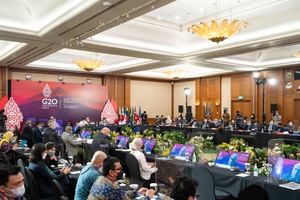 On the sidelines of the first HWG, a side event on “Financing for TB Response: Overcoming COVID-19 Disruption and Building Future Pandemic Preparedness” was held on 29-30 March 2022. The Indonesian G20 Presidency developed a document titled “Call to Action on Financing for Tuberculosis Response” to conclude the side event on TB.

The Call to Action on Financing for TB Response has been drafted by the Indonesian G20 Presidency in consultation with G20 members, in collaboration with World Health Organization, Stop TB Partnership, Global TB Caucus, Global Fund, USAID, World Bank, and Stop TB Partnership Indonesia without prejudice to members’ views and does not purport to suggest agreement among G20 members on these issues.

Fifty percent of new infections and deaths due to TB are in the G20 countries that possess strong financial capacity in tackling this epidemic. Indonesia is one the highest TB burden countries and by leading the development of the “Call To Action” document, Indonesia has set a great example.

TB is the second leading cause of death from infectious diseases globally, after COVID, and in spite of being curable, preventable and the TB response being a cost-efficient investment, financial resources are less than 40% of what is needed. The combined impact of TB and COVID-19 is fueling inequalities and shattering economies, which has resulted in the increase in TB incidence and mortality for the first time in almost two decades as reported in the Global TB Report 2022 launched by WHO yesterday.

The Call To Action calls on the G20 member countries to ensure continuity of equitable and high-quality treatment, care and support services for mobile populations, including internally displaced people and migrants and programming that address the needs of the most affected and vulnerable populations, for a more efficient and effective TB response. The Global Plan to End TB 2023-2030, provides a detailed costing of financial resources needed to end TB, estimates and anticipates the priority actions that will be necessary in the wake of the COVID-19 pandemic and informs follow-up commitments to be made at the second United Nations High Level Meeting (UNHLM) on TB in 2023. The Global Plan projects that between 2023 and 2030, US$ 249.98 billion will need to be mobilized from all sources—governments, philanthropy, the private sector, and innovative sources of financing.

Budi Gunadi Sadikin, Minister of Health of the Republic of Indonesia, explained, “The thirteen items outlined in the Call to Action on Financing for TB encourage countries to mobilize resources for unmet needs including accelerating development and availability of new TB diagnostics, medicines, and vaccines, to utilize real-time data surveillance and digital health, and to strengthen infection prevention and control activities. Leaders also profess support in strengthening international ties and forging partnerships to sustainably finance rights-based, gender sensitive and multisectoral approaches for policies and service delivery innovations”.

Lucica Ditiu, the Executive Director of the Stop TB Partnership applauds the support for TB cultivated during Indonesia’s G20 presidency. She noted, “Building upon this important momentum, I hope the G20 countries will continue this great vision during India G20 2023 Presidency and will provide leadership for the 2023 United Nations General Assembly High-Level Meeting on Tuberculosis. G20 countries can lead the efforts especially in raising additional resources towards closing TB investment gaps. Global investments need to increase fourfold by 2023 for us to achieve the funding needed to get on track and end TB by 2030.”

Nurul Luntungan, the Head of the Stop TB Partnership Indonesia (STPI) elaborated on how the TB response from G20 countries requires not only adequate resources but also a multi-sectoral approach to enable universal access to TB prevention and care. She stated, “As the TB epidemic is also driven by  social and economic determinants, commitment and actions from G20 leaders in eliminating this disease need to be integrated with domestic and international financing mechanisms including for social protection, humanitarian assistance, and pandemic preparedness. Moreover, private sector engagement and community efforts within the formal TB response and health system must be enhanced for a more efficient and effective TB response.”