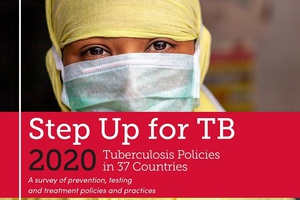 Geneva, Switzerland, 16 November 2020 –The Stop TB Partnership (STBP) and Médecins Sans Frontières (MSF) have released Step Up for TB 2020, a new report which reveals both progress and shortcomings in the alignment of national tuberculosis (TB) policies with the latest international recommendations. The report finds that significant policy gaps risk undermining progress in the fight against TB, a situation that is further exacerbated by the negative impact of the COVID-19 pandemic on people affected by TB.

Step Up for TB 2020 examines the national policies of 37 countries with a high burden of TB, assessing the extent to which they align with World Health Organization (WHO) guidelines and international recommendations. With an estimated 7.7 million people developing TB each year, these 37 surveyed countries represent 77% of the global TB burden.

“Earlier this year, the COVID-19 pandemic hit the world with devastating impact, and governments around the world quickly adopted new policies and laws in response,” said Dr. Lucica Ditiu, Executive Director, Stop TB Partnership. “Meanwhile, TB remains the top infectious disease killer, even though it is preventable and curable. To make matters worse, most countries still use outdated policies, practices, tools and treatment regimens. Our survey, which is conducted regularly, shows improvements every year, but we have a long way to go. We all must ensure that every single person affected by TB is diagnosed and treated using the latest available international guidelines and tools.”

On diagnosis, the report finds that many of the surveyed countries still have outdated testing policies that may lead to inadequate TB prevention and care. Around 347,000 people who develop TB each year in the 37 surveyed countries have a form of drug-resistant TB. Of them, only 1% can hope to access comprehensive universal drug sensitivity tests, as just six of the 37 countries (18%) have introduced the necessary policies.  TB is the most common cause of death among people living with HIV, more than 28 million of whom live in the 37 surveyed countries. But a mere 14% of those countries have put policies in place that allow for the use of lateral flow urine lipoarabinomannan assay (LAM) testing for TB, which has been internationally recommended since 2015.

Countries made progress on certain key indicators since 2017 when the last report in this series was published. 80% of surveyed countries—with more than 1.5 billion inhabitants—indicate that they are now able to use rapid molecular TB tests as the initial test for people with symptoms of TB, finally moving away microscopy. However, most countries do not seem to have implemented this policy at scale.

On treatment, only 61% countries have national policies that include a modified shorter all-oral regimen either for routine use or operational research. The Stop TB Partnership calls for an immediate halt to the use of TB treatment involving injectables; oral medicines should be used instead, as recommended by WHO since 2018.

On prevention, 81% of the surveyed countries, with a total population of more than 2.8 billion people, have policies in place that provide for a shorter TB preventive therapy regimen. Of concern is the finding that nearly half of the countries did not have policies on the provision of TB preventive treatment to household contacts of all age groups.

With just two years until the 2022 deadline for the UN TB targets, urgent investment is required to get global efforts back on track. The Stop TB Partnership and MSF call on the leadership of all countries to update and implement their TB policies in line with the latest WHO and internationally recognized guidelines in time for the next World TB Day on 24 March 2021.

Download the Step Up for TB 2020 report here and read the press release on the findings here. We’ve also released (click below) the following resources to support the report launch:

Step Up for TB resource page