Johannesburg, 29 June 2018 | The National Department of Health is hosting the third BRICS TB Research Network Meeting, over 28 – 29 June 2018, in Johannesburg with delegates from BRICS countries and the World Health Organization (WHO). The meeting is part of the multi-country vision to accelerate research and innovation in TB, through the BRICS cooperation mechanisms and is a preparatory meeting in advance of the forthcoming BRICS Ministers of Health meeting and the United Nations High-Level Meeting. 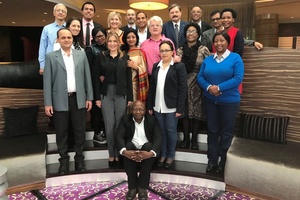 The BRICS TB Research Network is set against the backdrop of a TB epidemic where, in 2016, there were an estimated 10.4 million new TB cases globally, with BRICS accounting for 40% of the global TB disease burden and mortality, and at least 50% of the global multidrug-resistant TB cases.

Considering the burden of tuberculosis in the BRICS countries and the research capacity within these five countries, the BRICS TB Research Network was established to develop robust research into new tools, diagnostics, vaccines and drugs and to inform and accelerate the best use of existing and new interventions in TB control and prevention toward elimination. “We want BRICS to take the lead in a process that will contribute to the elimination of TB by investing in new diagnostics, vaccines, and drugs as well as contributing to reducing the pill burden through shortened treatment regimens,” says Ms Precious Matsoso, Director General of Health, South Africa.

Investing in health care innovation was also the message we highlighted at the recent 5th SA TB Conference, held 12-15 June 2018, at Durban ICC. The National Department of Health and SAMRC hosted satellite sessions, showcasing our cutting-edge TB research and developed an interactive exhibition that resonated with the theme of the conference, “Step Up, and Let’s Embrace All to End TB!”

“The Network is an endeavour to collaborate with BRICS Ministries of Health and scientists to address the problems with TB in BRICS and to raise resources to find local solutions,” says Prof Gray, President and CEO of the SAMRC. “Collaborating on such platforms is how South Africa can strengthen our efforts to end TB,” says Dr Barry Kistnasamy. South Africa is expanding and strengthening its existing research network in BRICS by developing partnerships in BRICS who share a vision of ending TB.

“We need to ensure that all those in need have access to existing tools and novel financing mechanisms are created to accelerate development of new diagnostics, therapeutics and vaccines. BRICS countries have the capacity to foster global TB R&D,” says Dr Matteo Zignol of WHO.

“This collaborative approach for addressing the common challenges is a step in the right direction.  India is committed towards achieving the goal of Ending TB along with the other BRICS countries by supporting the BRICS TB Research Network," said Dr Srikanth Tripathy, Director, National Institute for Research in Tuberculosis, Chennai, India.

Russian TB experts suggest that successful work of the BRICS TB Research Network is critically important for improving the situation in our countries and achievement of the End TB Strategy. The Framework of the Network should provide an exchange of technologies and best practices for TB control developed in BRICS countries.

Russian experts and manufacturers have new technologies, diagnostics, treatment practices for joint trials and validations. “We believe that those tools can help to support and improve TB control in all BRICS countries. At the same time we expect to participate in joint research focused on development, trials, validations and new technologies focused on specific tasks of TB control in our countries, first of all cost effective and rapid detection of XDR-TB and additional DR-TB detection among people living with HIV/AIDS, as well as developing and testing short regimens for M/XDR-TB,” says Vadim Testov, National Research Medical Center of Phthisiopulmonology and Infection Diseases, Russian Ministry of Health.

The Brazilian delegation represented by Brazilian government officials and researchers fully support the activities of the BRICS TB Research Network. “BRICS countries have lots of actions in the fight against tuberculosis and this Network will make it feasible for joint research and development activities in areas which overlap,” says Wanessa Tenório and Kleydson Andrade, from Department of Transmissible Disease Surveillance, Ministry of Health of Brazil.

Among the deliverables of the current Meeting, the partners are looking to map the tuberculosis scientific landscape among the BRICS countries and generate collaborative research project proposals covering diagnostics, vaccines, drugs, infection control for TB and patient centered delivery and care.

The South African Medical Research Council:
The South African Medical Research Council (SAMRC) was established in 1969 with a mandate to improve the health of the country’s population, through research, development and technology transfer, so that people can enjoy a better quality of life. With a strategic objective to help strengthen the health systems of the country – in line with that of the Department of Health, the SAMRC constantly identifies the main causes of death in South Africa (www.samrc.ac.za).

BRICS TB Research Network:
The BRICS TB Research Network was launched in September 2017 as an outcome of the BRICS TB Cooperation Plan approved in the 6th Health Ministers Meeting in New Delhi, 2016, and supported by BRICS Heads of States, as agreed in the Xiamen Declaration, 2017. The Network’s key objectives include identifying scientific research, development and innovation, fostering development of new effective, safe and affordable preventative tools, diagnostics and treatment regimens for all forms of TB, and conducting multi-country TB studies.