Indians booed at global meet for ‘genocide of TB patients’ 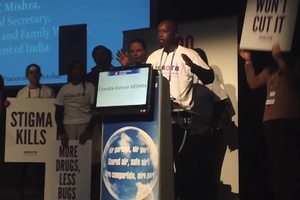 ARIS: Accusing India of committing genocide of tuberculosis patients, international activists on Friday booed Indian health officials at the ongoing Union World Conference on Lung Health here while they were trying to showcase the country's efforts to check the disease that kills 1,000 Indians every day.

"India supplies drugs to the world, but it's not providing anti-TB drugs to its own patients," said Kenyan activist Bactrin Killingo, who along with a dozen other activists physically stopped Union additional secretary (health) Chandra Kishore Mishra from starting his talk. The activists, who were chanting "shame India", belonged to the Global Tuberculosis Community Advisory Board (TB CAB) that is a civil society initiative to raise concerns of patients.

The activists were referring to the June shortage of anti-TB drugs when health officials had to allegedly split the year-long stock of medicines between patients and refused to take on new patients. The Union government had, in fact, directed medicine stocks from Rajasthan to Mumbai during the shortage. Each TB patient is allocated a box of medicines under the Revised National Tuberculosis Control Programme and patients take the drugs over a year under direct observation of a health official.

"India supplies most of the drugs to where I come from in Africa, but people in India are dying because they are not getting the medicines and whatever medicines they get are substandard. It is genocide," he said, adding that charity begins at home. The activists also said India, which is home to the highest number of multidrug-resistant TB patients, could emerge as the breeding ground in a globalized world.

The shortage was attributed to red tape and the failure of Indian officials to procure drugs on time. Indian officials, however, strongly denied the charges. An official said there had been a depletion of stocks of pediatric TB drugs. "But we have since introduced measures to ensure that 60,000 patients have drug supply for a year," he said.

Mishra, who made a presentation after the TB CAB protest, said, "I do know what we did wrong and when. Based on that, we are planning our strategy and moving ahead." He said India had 692 tuberculosis districts, examined 60 million TB suspects and put 15.9 million on treatment.

A government official said a three-step plan to overcome any shortage of TB drugs, especially for patients with drug-resistant TB, had been worked out. "Through the Global Drug Facility, we are getting 15,500 new courses of drugs by December-end," he said. Secondly, it was in the process of inviting tender for another 35,500 courses. Thirdly, it was planning to make purchases using local funds.

Watch a video of the demonstration here.

Source: The Times of India