Adequate funding is crucial in the fight against tuberculosis, but progress worldwide is threatened by underinvestment in tuberculosis research and development. 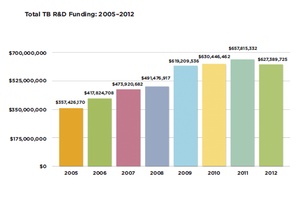 Two reports published last month have laid bare the extent of the funding crisis facing worldwide efforts to control tuberculosis. In its Global Tuberculosis Report 2013, WHO stated that national programmes in low-income and middle-income countries are underfunded by about US$2 billion for both 2014 and 2015. “Progress remains fragile and could be reversed without adequate funding”, wrote the authors.

Meanwhile, a report by Treatment Action Group (TAG) showed that funding for tuberculosis research fell in 2012 by $30 million. This decline—the first since TAG began monitoring in 2005—left funding at $627 million; some $1·4 billion short of the levels envisaged by the 2011—15 Global Plan. In a similarly worded warning to WHO's, TAG noted that the scarcity of resources for research and development was “threatening fragile global progress” in the fight against tuberculosis.

TAG added that 2012 saw an “unprecedented pullback from the private sector, which reduced its investments by 22·1% in 2012 to supply 18% of total tuberculosis research and development”. AstraZeneca cut funding for its candidate drug AZD-5847 by close to $3 million; Otsuka reduced its investment in drug discovery programmes; and Pfizer withdrew from tuberculosis research altogether, shutting down its anti-infectives division. A previous analysis by WHO showed that of the roughly $115 billion invested in research by the large pharmaceutical companies, less than 3% was devoted to antimicrobials; testament to the companies' preference for more lucrative fields. “Tuberculosis suffers because it is a disease of poverty—there is very little interest in big pharma in diseases of this type because they know that since the big sales are going to be in developing countries, there is no income generation”, explained Mario Raviglione (WHO, Geneva, Switzerland).

The consequences of the reduced expenditure are likely to be severe. “This will result in millions of people dying unnecessarily”, said Mel Spigelman (The Global Alliance for TB Drug Development, New York, USA). “We will still make progress but if you have key players withdrawing, it definitely slows things down.” Furthermore, TAG's report assessed the situation before the 2013 budget sequestration cuts in the USA. Because 61% of global investment in tuberculosis research comes from the public sector, which is dominated by US institutions, 2013 could see an even more marked decline in spending. The authors warned of an unbridgeable “gap created by the twin forces of public-sector budgetary woes and private-sector disinvestment”.

According to WHO's report, “ten new or repurposed tuberculosis drugs are in late phases of clinical development”. Among these is bedaquiline, the first new tuberculosis drug to gain approval in four decades. In June 2013, WHO issued interim guidance about use of bedaquiline for treating multidrug-resistant tuberculosis. “It is not a panacea”, cautioned Raviglione. “It has only been tested up to stage 2b trials, so there is not yet a full understanding of the efficacy of the drug or the potential toxicity.” And there are questions regarding its affordability—it will cost low-income countries $900, and all other countries $3000.

Two other trials are establishing the achievability of reducing the duration of treatment for drug-sensitive tuberculosis from 6 months to 4 months; the results of both should be available early next year. “After this, nothing will probably be available for new drugs, for new regimens for 2—4 years”, said Raviglione. And beyond this, the cupboard looks bare. “There are no drugs in phase 1”, Grania Brigden (Médicins Sans Frontières [MSF], Geneva, Switzerland) told TLID.

It is difficult to deny that the current system has failed. MSF advocates establishment of an open-access collaborative framework to drive the development of tuberculosis drug regimens, a mix of prizes, grants, and incentives. “We need an open platform where people can collaborate so that as well as developing drugs, we're developing regimens,” said Brigden. In the absence of such a set-up, she worries about a scenario in which the two or three new drugs in the offing emerge, with no real understanding of how these can be used in a regimen, resistance inevitably develops, and decades go by without any viable replacements. “New drugs are great but tuberculosis is treated in a regimen; we should be looking a lot earlier at how to combine these drugs, if we don't we could lose this opportunity to get on top of the tuberculosis epidemic”, Brigden concluded.

The epidemic took about 1·3 million lives in 2012, according to WHO's report. They estimated that 8·6 million people developed the disease, 3 million of whom were missed by national notification systems, either because they were undiagnosed or because they were hidden in the private sector (mostly in the Indian subcontinent).

Needless to say, a key challenge is multidrug-resistant tuberculosis. According to WHO, around 450 000 people developed the disease in 2012, with roughly 170 000 deaths. “It is becoming an epidemic in its own right—people are getting multidrug-resistant [disease] as their first form of tuberculosis”, said Brigden. But roughly three of four cases go undiagnosed. And even among the 94 000 diagnosed in 2012, some 17 000 were not treated, because of a scarcity of resources and trained staff.

Those who are lucky enough to receive treatment face 2 years of gruelling therapy, including 8 months of daily injections, at the end of which the chances of failure outweigh those of success. “The current WHO recommended regimen is expensive and difficult to implement, and there is a lack of political will to match the scale of diagnosis and the required scale of treatment”, explained Brigden. Treatment of multidrug-resistant tuberculosis can run into hundreds of thousands of dollars. But investment in research could obviate the need for such vast expenditure—Spigelman believes that the cost of treatment of multidrug-resistant forms could be reduced by 90% with the right regimen.

The future is dependent on the availability of resources. Roughly half of the world's tuberculosis burden is in Brazil, China, India, Russia and South Africa, countries that could be expected to increase their contributions to control efforts. Elsewhere, nations are dependent in varying degrees on international donors, and WHO emphasises the importance of replenishing the Global Fund.

Raviglione talks about cutting incidence by 10% every year (at the moment, it is falling by 2%). Europe was able to do this after World War 2, but there they had universal coverage and the Marshall Plan. “In some places today, they are still charging patients, this is preventing access and good treatment outcomes”, said Raviglione. China, for example, aims to achieve universal coverage by 2020. A sharp decline in cases is contingent on bolstering of health-care infrastructure, and there is no guarantee that the money for this will be forthcoming. “At the heart of all this we have a neglected disease and it is neglected on multiple fronts” points out Spigelman. Brigden agrees. “In a lot of countries, there is not the civil society to make the demands on the Governments to prioritise tuberculosis, to start investing in it and stop it from being a donor driven programme”, she told TLID.