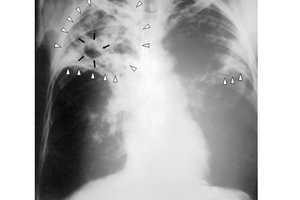 Most cases of pulmonary TB are post-primary TB infections. This means that after the initial, primary infection has healed, the granuloma (the mass of immune cells surrounding the TB infection preventing it from doing further damage) that was formed during that process still contains TB bacteria, which can survive for years (see How TB infects the body).

If the immune system of the person with a TB granuloma deteriorates, these bacteria can be reactivated and TB may break out again. Once the TB bacilli become reactivated, they rapidly destroy the lung tissue around the granuloma. This causes major damage to the tissue, which gets destroyed. Lung tissue is usually very thin and almost sponge-like because it is filled with air in the alveoli, where oxygen is exchanged from the air into the blood. The lung tissue affected by TB bacilli first becomes hard, making the oxygen exchange impossible. This is called fibrosis.

As a second step, the cells that make up the lung tissue die. This is called necrosis. Dead, or necrotic, tissue tends to tear and break down. In the lung, this is called 'cavitation', after the latin word for cave. It is thought that the TB bacilli destroy the lung tissue in a cave formation, where more and more of them sit in the middle and slowly destroy more tissue at the edges. These cavitations can be seen on X-rays to diagnose pulmonary TB (see picture). A cavitation contains sputum with about 1 million TB bacilli per millilitre. The danger of cavitations, besides the destruction of the healthy lung tissue, is that through progressive destruction they eventually reach a part of an airway. If that happens, the TB bacilli destroy the wall of the airway and thus have a connection to the outside. Through the airway, they can be transported up into the trachea, through the mouth and nose of a coughing person, and be transmitted to other people through droplet infection (see How TB is spread).

From the first cavitation in the lung tissue, the TB bacilli can spread through the destructed tissue. If they have reached an airway, they will spread to other parts of the lung, travelling up and down the airway and finding new places to settle and form a new cavitation. This is called bronchogenic spread (bronchus = the airway, -genic = coming from). If they gain access to a blood vessel (blood vessels are spread out throughout the lung tissue to provide oxygen and other nutrients transported in the blood), they can travel in the bloodstream and be disseminated all over the lungs and into other parts of the body. The result of this dissemination is called 'disseminated TB' or 'miliary TB', and it usually happens when the body's immune system is not able to contain the infection, for example when it is weakened by HIV.