How TB is spread

This article explains how TB is spread and what can be done to prevent it. 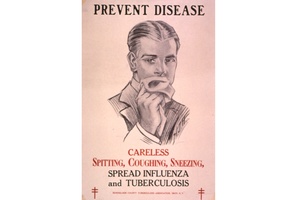 Old public health poster aimed at preventing the spread of TB. It is important that clinics and hospitals implement infection control.

When the person with TB coughs, tubercle bacilli are transported in fine droplets from the infection in the lungs into the air, and are then inhaled into the lungs of the previously uninfected person. Because of the speed that tubercle bacilli have when they are being coughed up, they get catapulted into the air, and easily reach another person standing one or two meters away. The droplets are also extremely small and remain in the air for a long time. This means that TB can infect people who share an air space, such as a bedroom. Therefore, it is very important that a person with TB covers his or her mouth when coughing or wears a facemask to protect others.

Besides the direct transmission from an infected person to an uninfected person, the TB bacilli can also be transmitted by dust. Once coughed out by a person with TB, the bacilli can survive up to six months outside the body if they are protected from direct sunlight. Often they settle in dusty, dark areas. When this dust gets swirled up (by sweeping, wind, or when children play on the ground), the TB bacilli then fly through the air and may be inhaled. When they are inhaled, they travel into the lungs of the person.

A rare form of transmission is the ingestion (swallowing) of unpasteurized milk from an infected animal – in this case the person becomes infected with Mycobacterium bovis, the animal form of the TB bacterium. This way of infection plays a role in rural places, where people drink milk straight from the cow. To avoid this, milk should always be boiled before drinking – this way the bacteria and germs are killed. The milk that can be bought in supermarkets is usually already pasteurized.

Usually TB cannot be transmitted from a pregnant mother to her baby, because it does not cross the placenta. A rare exception is miliary TB, when the TB bacilli might break through the placenta to the fetus. However, babies can get infected during birth, if the instruments used are infected: for example, if a baby needs a mask to help her breathing, and this mask contains TB bacilli.

TB recognizes no difference between color, race, social status or gender and anyone may become infected. However, there are risk factors that make certain people more vulnerable to developing active TB after inhaling the TB bacillus. The strength of the immune system determines whether or not a person who gets infected with the TB bacillus will be able to fight the bacillus and keep it in check, or develop active TB.

Because TB is an airborne disease, it spreads easily where people share limited space: in over-crowded rooms, small houses, hospital wards for example. TB is often referred to as a ‘disease of poverty’, not because the TB bacillus singles out poor people, but because the circumstances that characterize poverty lead to a rapid spread of TB: many people sharing rooms and living in ill-lit, damp, often dusty spaces (such as shacks) allow for the TB bacillus to rapidly spread from one infected person to others. In addition, poverty often means that good nutrition is not affordable, this weakens the immune system and infected people are more prone to develop active TB.

It is important that clinics and hospitals implement infection control. Many people contract TB including drug-resistant strains of the disease in poorly designed waiting rooms of health facilities. Proper infection control requires installing special UV lights that destroy TB bacteria or designing waiting rooms that allow air to flow through. An example of the latter, possibly more effective and cheaper option, is the Ubuntu TB clinic in Khayelitsha.

Another risk to get infected with TB is HIV infection. The immune system that is weakened by HIV cannot effectively control the TB bacillus and thus, people living with HIV often develop TB. Studies have shown that the co-infection rates for HIV/ TB in South Africa are as high as 95% at Helen Joseph hospital in Johannesburg. [1]