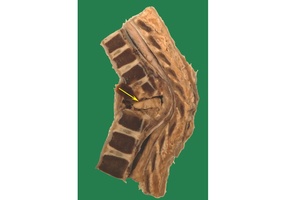 A photo of TB in the spine

These estimates are varied because there are certain factors, often specific to certain regions of the world that make extrapulmonary infections more likely. Extrapulmonary TB is especially common in people living with HIV and in children. Therefore, it is much more common in countries with a high HIV prevalence (such as South Africa) and in countries where a lot of children are infected with TB.

It is thought that the reason for higher rates of extrapulmonary TB in people living with HIV is that their immune systems cannot respond as strongly to a TB infection, and are not able to contain the TB bacilli. The primary TB infection is still the lungs, but TB bacilli then access the blood stream and spread through the body, finding other sites to build cavitations and multiply (see [Pulmonary TB](http://www.tb.org.za/posts/2011/5/31/pulmonary-tuberculosis/ "Pulmonary TB")). One argument supporting this hypothesis is that people living with HIV who are also infected with TB often have TB bacilli in their blood. Usually TB bacilli, unlike HIV, remain in the site where they first infected the body and do not gain access to the blood stream.

People with extrapulmonary TB initially may have similar symptoms to people with pulmonary TB: fever, night sweats and weight loss. In addition to these, they then often develop complaints that are specific to the body site that has been infected with TB. It is often more difficult to diagnose extrapulmonary TB.

Because extrapulmonary TB is less common, doctors often first think of other causes for the symptoms (for example, pain in the right ankle is more likely to be a sprained ankle than TB of the joint). Secondly, extrapulmonary TB often sits in body sites that are difficult to access (like the liver, which is in the middle of the abdomen and cannot be easily touched or examined). With extrapulmonary TB, a small amount of TB bacilli can often cause great damage. This is in contrast to TB in the lungs where bacilli can multiply for quite a while before causing real tissue damage.

The most common forms of extrapulmonary TB are:

This is the most common form of extrapulmonary TB. TB bacilli often infect the lymph nodes in the neck and above the clavicles (the thin bone underneath the shoulders), which then swell and inflame the surrounding skin. Any lymph node in the body can become infected with TB; swollen lymph nodes can also cause other problems. To diagnose TB of the lymph node(s), a sample of the infected node must be tested for TB bacilli. This usually involves using a needle syringe to take a sample for examination under a microscope.

Pleural TB is TB of the thin skin surrounding the lungs. This external lining serves to separate the lungs from the wall of the chest cavity. It is double-layered (one layer adheres to the lungs, one layer to the chest wall), and there is a small space in-between the layers, in which the TB bacilli can sit and multiply. As a result, the area can become inflamed resulting in fever and pain when breathing. This inflammation also leads the pleura to secrete liquid, which then assembles in between the two layers of the pleura– this is called a pleural effusion. To diagnose pleural TB, a sample of the pleural effusion fluid must be examined for TB bacilli. Samples are collected by inserting a needle through the chest wall into the space between the pleural layers to remove some of the fluid.

3. TB of the bone and the joint

TB bacilli can sit in the bones or the joints and cause pain and swelling of the affected area. Very often people don't think that these symptoms are associated with TB, but rather by an accident, or another injury. To diagnose TB of the bone or joint, health practitioners must take X-rays, and often CT Scans (computer tomographic scans) or an MRI (magnetic resonance imaging). As with the other forms of extrapulmonary TB, TB bacilli must then be extracted from the affected bone or joint using a needle syringe to extract a small sample.

4. TB of the central nervous system

The central nervous system is made up of the brain and the spinal cord. TB bacilli can infect both, and cause TB meningitis – an infection of the thin layer that covers the brain. Symptoms depend on where in the brain the TB bacilli are – usually people with TB meningitis experience drowsiness and lethargy, have delayed reactions, have difficulty moving their hands or feet and speaking or focus their eyes. TB meningitis is dangerous and difficult to treat. To diagnose it, health practitioners must perform a lumbar puncture – this requires inserting a needle into the back in order to access the fluid surrounding the spinal cord (which is connected to the brain called central spinal fluid, or CSF.

5. TB of other places

TB can infect any part of the body, including the abdominal cavity (the belly region that contains important organs such as the liver, the spleen and the bowels; this is then called abdominal TB), and the kidneys, the bladder and the urinary tract, which is the system that urine flows through when it is excreted from the body– this kind of TB is called genitourinary TB (derived from “genital” and “urinary” as these are the sites where this type of TB manifests).