A description of the TB germ: Mycobacterium tuberculosis 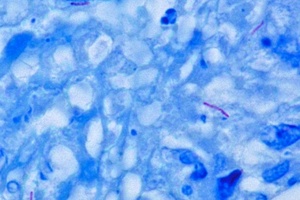 The purple rod-shaped organism is a TB bacterium. This name, meaning ‘fungus-bacteria’ refers to shape of the bacillus when it grows in a laboratory: when seen through a microscope it forms heaps of small rods with protective layers around them, and thus looks like a fungus.

An important ‘man-made’ version of Mycobacterium bovis is the BCG vaccine: in the early 20th century scientists developed a version of the bacillus called Bacillus Calmette-Guérin (BCG) that was much less infectious and aggressive. This version is now used to vaccinate people. By injecting it into the body it triggers a response from the immune system and builds a better immune response against the ‘real’ mycobacterium tuberculosis – while at the same time being harmless enough not to cause TB infection.

Mycobacterium tuberculosis is rapidly killed by exposure to direct sunlight. If it is protected from sunlight, it remains alive and infectious for up to ten weeks (for example in dried saliva). It is a small bacillus that can withstand most disinfectants and often remains in its dormant state. To survive, it needs oxygen: it is thus called an aerobic bacterium. Mycobacterium tuberculosis grows slowly: it reproduces itself every 24 to 48 hours. This is extremely slow for bacteria. There are other bacteria that reproduce every 20 minutes.

The bacillus has a rod-shaped body and is approximately 0.2 millimeter long. It cannot be seen with the naked eye; one needs a microscope to detect it. The bacillus’ body is surrounded by a cell wall that protects the contents of the cell against the exterior surroundings. Inside the bacillus are so-called organelles, small micro-units that ensure that the bacillus can create the energy it needs to survive.

In its anatomy, mycobacterium tuberculosis resembles a lot of other bacteria, but it has unique features that make it difficult to diagnose and treat. Its cell wall is extraordinarily thick and complex. A substance called mycolic acid sits on the cell wall and protects the bacillus against the body’s immune response. It is these mycolic acids that are also responsible for a particular characteristic of all mycobacteria, which is used to identify Mycobacterium tuberculosis in diagnostic tests.

Usually bacteria are identified by adding coloring agents to the laboratory surface on which they grow. This process is called ‘staining’. Different bacteria have different ways of responding to staining agents, and this allows scientists to differentiate between them. Because of its thick cell wall with the mycolic acids, mycobacterium tuberculosis does not respond very well to staining agents. In fact, it is very difficult to stain any mycobacterium.

There is one specific technique to stain mycobacterium: the Ziehl-Neelsen stain, named after the two German doctors who first described it. When stained with a Ziehl-Neelsen stain, the mycolic acids take on the color quickly and retain them inside the bacillus. Under the microscope, the bacillus is seen as a bright red rod, while the surface that it grows on is colored blue.