This article descibes the tests that are used to diagnose active TB.


The arrow shows the TB cavity in the upper part of the right lung.
People can have TB even if the sputum culture results come back as negative.

The diagnosic tests for TB, as for all diseases, have to follow two important criteria of quality: sensitivity and specificity.

Sensitivity means that a test needs to detect all people with a disease. For example, if 100 people are being tested, and 50 of them have TB, then a good test should find all 50 people. In this case, health workers would speak of a test with a 'high sensitivity'.

Specificity means that a test only detects people with a disease, and does not wrongly detect a disease in somebody healthy. If of the 100 people tested for TB, 50 people are healthy, then a test with a good specificity would correctly identify the 50 healthy people and show 50 negative results.

The first step to detecting TB infection, after taking a medical history and doing a physical exam, is to do a chest x-ray. This allows the health worker to examine the lungs of the person with suspected TB. On a chest x-ray from someone with TB you can often see the cavitation that the TB bacteria form in the lung tissue. The picture here shows a chest x-ray, and the arrow points to a TB cavity in the right upper part of the lung (in an x-ray, the right and left side are reversed).

TB cavities are often in these upper parts of the lung, also known as the apex (apex is latin for 'the highest point'). Chest x-rays have poor specificity. If a health worker sees something on the lung, it can also be a lot of other things, and is not necessarily TB. Therefore chest x-rays are usually an indicator of whether or not a person might have TB, but they cannot confirm the diagnosis. They are used to confirm a suspicion, and will always be followed by tests that aim at finding the TB bacterium. The diagnosis of TB cannot be made by a chest x-ray alone. It can also not be excluded by a chest x-ray.

Instead,the diagnosis of active tuberculosis means finding the bacterium in a sample of bodily fluid from the patient. Where the bacterium is found depends on where the infection takes place. In most cases, Mycobacterium tuberculosis infects the lungs (see 'Pulmonary Tuberculosis'). If that is the case, the bacterium can be found in sputum. Sputum is a very thick bodily fluid (also called mucus), which comes from the lower airways. It is thicker than saliva and is usually coughed up. 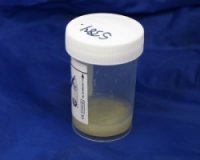 If a person has difficulty coughing up sputum, it can be induced by inhaling saline air through a mask., called a nebulizer. This is often done to help children cough up sputum.

Usually bacteria are identified by adding colouring agents to the laboratory surface on which they grow. This process is called ‘staining’. Different bacteria have different ways of responding to staining agents, and this allows scientists to differentiate between them. Because of its thick cell wall consisting of mycolic acids, Mycobacterium tuberculosis does not respond very well to most staining agents. In fact, it is very difficult to stain any mycobacterium.

For sputum smears, the TB bacterium is stained with an agent that binds to the acids on the cell wall. This is typically done using the Ziehl-Neelson method, which is named after the two scientists who described it in the late 1800s. It is also called an acid-fast stain. However, sputum smears often do not detect TB especially in people who have advanced HIV disease. Consequently sputum smear microscopy has a poor sensitivity; it misses many cases of people with active TB.

In one large study, sensitivity was only 53%. In other words TB was not detected in about half of patients who really had TB. This is very poor. In addition, this method requires much skill. But sputum microscopy is widely used, because it is one of the cheapest and quickest ways to diagnose TB. Newer flourescent microscopes have improved the sensitivity of sputum microscopy but not nearly enough.

For sputum cultures, the sputum is added to a special surface in a laboratory, under circumstances that will encourage the TB bacterium to grow. Lab technicians then check whether or not the bacterium grows. Because TB bacteria grow very slowly, this often takes 3 or 4 weeks, sometimes even more. If there are TB bacteria in the sputum, then they will start growing in round clusters, and the culture is deemed positive. A positive culture is proof for an infection with Mycobacterium tuberculosis, so it is proof that somebody has active TB.

Compared to sputum smears, sputum cultures have a much higher sensitivity, but it is still not high enough (only 82% in a large study). This means that unfortunately, sputum cultures often do not pick up every person with TB, and people can have TB even if the sputum culture results come back negative.

If a patient with presumed pulmonary tuberculosis cannot cough up sputum, there are other ways to get body fluids that contain Mycobacterium tuberculosis. Health workers can do gastric washings, a so-called laryngeal swap or get a sample through a bronchoscopy. For a gastric washing, the person with presumed TB has to swallow a tube through which the health workers sucks up a little bit of what is in the person's stomach. This sample is then examined either as a smear, or put into a culture. Gastric washings usually have to be done at least twice to gain enough for a sample. In South Africa, they are done twice on different days. Children often need to have gastric washings done to diagnose TB.

Recently, a new test has been developed to diagnose active TB. It is called the GeneXpert, and also uses sputum samples. If the sample contains TB bacterium, it multiplies its DNA (the “genes” of the bacterium, DNA is short for desoxyrubinucleic acid) through a method called PCR (polymerase chain reaction). This allows it to detect TB bacterium very reliably, and also very fast – it only takes about 2 hours for the test to come to a result. So far, it has had good sensitivity and specificity, and it can also test if the TB bacterium is resistant to one of the TB drugs, rifampicin. However, the GeneXpert machine is not widely available yet.

© This work is in the public domain.
Article