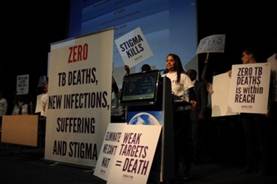 30 October 2013 - Paris - Tuberculosis (TB) activists and representatives of affected communities stormed the opening of the Stop TB Symposium at the World Conference on Lung Health today in Paris, demanding faster progress towards eliminating TB and a target of zero TB deaths.

After the activists had marched onto the stage, Colleen Daniels of Treatment Action Group took to the microphone to challenge the delegates assembled to be more ambitious and aim for zero TB deaths, zero new infections and zero suffering and stigma.

The demonstration and address earned applause from the audience, with the majoritytaking to their feet in support.

For the first time, the International Union Against Tuberculosis and Lung Disease awarded 100 free registrations to the conference for civil society delegates and representatives of communities affected by TB.