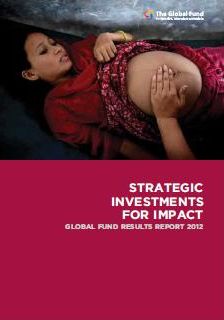 The Global Fund to Fight AIDS, Tuberculosis and Malaria announced the release of a results report that shows a dramatic increase in the number of insecticide-treated nets distributed to protect families from malaria.

The results also show that the number of people receiving antiretroviral therapy for HIV and those being treated effectively for tuberculosis rose sharply over the same period.

Together with its partners, the Global Fund is helping to turn the tide on AIDS, TB and malaria through an effective set of health interventions. The report shows that incidence and mortality for each of those diseases are falling across the world due to the work of countries, the Global Fund and its partners.

Overall, the report shows that 8.7 million lives have been saved by programs supported by the Global Fund since the organization was formed in 2002. The report, entitled “Strategic Investments for Impact: Global Fund Results 2012,” includes data through June 2012.

‘This report demonstrates a continuation of outstanding achievements which reflect the commitment of donors, the hard work of implementers, and the dedication of partners to supporting treatment and prevention all over the world.

“Today, people in the poorest countries can access essential treatment and prevention services,” wrote Gabriel Jaramillo, General Manager of the Global Fund, in a foreword to the report. “This is because of highly effective, determined and innovative work by the health professionals, administrators and community workers who we are proud to support.”

The data show that over an 18-month period that ended in June, 2012, 110 million bed nets were distributed, an increase of 73 per cent since the end of 2010, bringing the total number of bed nets delivered by Global Fund-supported programs to 270 million.

Over the same 18-month period, an additional 600,000 people living with HIV have begun life-saving anti-retroviral treatment through Global Fund-supported programs, taking the total to 3.6 million.

Global Fund supported programs have since 2002 detected and treated 9.3 million new smear-positive cases of tuberculosis – an increase of 21 per cent between 2010 and mid-2012.

TB mortality has fallen dramatically since 2000. Half or more of the countries that have received Global Fund support are on track to meet international targets for case detection, treatment success and TB disease incidence.

Big declines in case incidence and mortality for malaria have been seen in recent years at the same time as distribution of insecticide-treated nets has risen significantly. However, a further acceleration in net distribution is needed to achieve the relevant international targets by 2015.  Countries are achieving significant impact in malaria, HIV and TB, but support needs to be accelerated to achieve international targets.

Additional results showed that a total of 210 million HIV testing and counselling sessions have been provided and 260 million cases of malaria and 64,000 multi-drug resistant TB cases have been treated.

With a total of US$ 22.9 billion in funding approved for programs in 151 countries, the Global Fund had disbursed a total of US $15.7 billion, as of December 2011. The Board has requested the Secretariat to move ahead with plans for the approval of the available uncommitted funds in new funding in the coming years.