New TAG report: Funding for TB research in 2019 nears half of global target 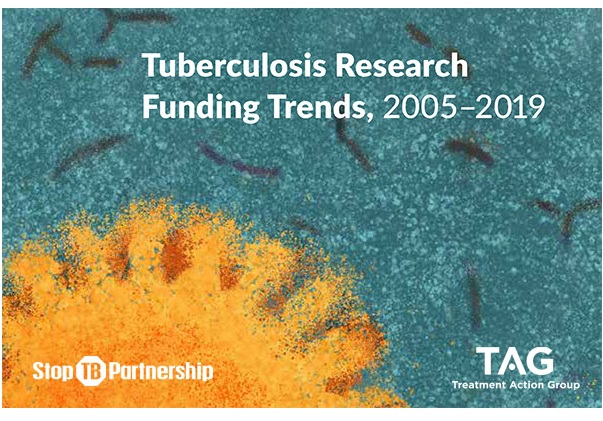 The report — Tuberculosis Research Funding Trends, 2005–2019 — presents new data on 2019 funding for TB research and development and analyzes trends in investment since 2005.

New York City, December 8, 2020 — Global funding for tuberculosis (TB) research totaled over US$900 million in 2019, the second highest level on record, according to a report released today by Treatment Action Group (TAG) and the United Nations-hosted Stop TB Partnership.

The report—Tuberculosis Research Funding Trends, 2005–2019—presents new data on 2019 funding for TB research and development (R&D) and analyzes trends in investment since 2005. TB killed more people than any other single infectious agent in 2019. The figures for 2019 provide a last look at funding for TB R&D before the devastating emergence of the COVID-19 pandemic in 2020, an event whose full effect on the research landscape for TB and other infectious diseases will only be known in a few years' time.

The report from TAG and Stop TB Partnership reveals that governments, philanthropies, pharmaceutical companies, and other organizations are making progress, but slowly, toward meeting the global goal to spend $2 billion on TB research annually. The $900 million spent on TB R&D in 2019 falls more than halfway short of the $2 billion target set by United Nations (UN) member states at the 2018 UN High-Level Meeting on the Fight to End Tuberculosis. The Stop TB Partnership’s Global Plan to End TB, 2018–2022 calls on the world to spend over $2.5 billion a year on TB research, recognizing that shortfalls in previous years mean the TB community must raise more money to keep scientific progress on pace to eliminate TB by 2030.

"Two years of record funding for TB research in 2018 and 2019 should remind all of us of the momentum we were building before the COVID-19 pandemic hit," said Lucica Ditiu, Executive Director of the Stop TB Partnership. "We cannot release governments and other funders from the commitments they made to increase investments in TB research because of pressure to shift resources to COVID-19. The truly impressive mobilization of funds for COVID-19 R&D demonstrates that seemingly impossible political and financial responses are possible when political will exists. Now let's achieve the same for TB!"

Only three countries—the United Kingdom, the Philippines, and New Zealand—met their “fair share” targets by dedicating at least 0.1% of their overall R&D expenditures to TB research in 2019. The public sector comprised 71% of total 2019 spending. The U.S. government invested just shy of $400 million—44% of overall expenditures, but short of the United States’ fair share of the total funding need. The United Kingdom was the second-largest public sector funder; India led spending among nations with high TB burdens. Unitaid was the fifth largest funder overall and led spending among multilateral organizations, which play an increasingly important role in financing and coordinating TB research.

“There is so much good TB science underway and planned that merits increased financial support. But people with and at risk of TB will only be able to benefit from a fraction of this promising science unless governments step up funding for TB research in the same way they've mobilized billions of dollars for COVID-19 R&D," said Mark Harrington, TAG Executive Director. "Nearly 1.5 million people died from TB in 2019—the world will not end an epidemic of this size with less than half of the money we need annually for research."

Mike Frick, TAG’s TB project Co-director, offered one stark example: “The $1.4 billion spent on TB vaccine research by all actors globally from 2005 to 2019 is less than the $1.5 billion the U.S. government awarded to Moderna, just one of several COVID-19 vaccine developers. That disparity signals a clear abjection of responsibility on the part of governments to promote the human rights of people with TB to enjoy the benefits of scientific progress and the highest attainable standard of health. It is past time that we as a TB community start expecting—and demanding—more."

TAG is publishing this 15th consecutive report on TB research funding shortly preceding the December 10th release of Deadly Divide: TB Commitments vs TB Realities, an urgent analysis by more than 150 TB affected community and civil society partners from over 60 countries that calls on governments to close deadly gaps in TB targets, including those for R&D. The TAG report is the longest-running record of TB research funding trends.

About TAG: Treatment Action Group (TAG) is an independent, activist, and community-based research and policy think tank fighting for better treatment and prevention, a vaccine, and a cure for HIV, TB, and hepatitis C virus (HCV). TAG works to ensure that all people with HIV, TB, and HCV receive lifesaving treatment, care, and information. We are science-based treatment activists working to expand and accelerate vital research and effective community engagement with research and policy institutions.