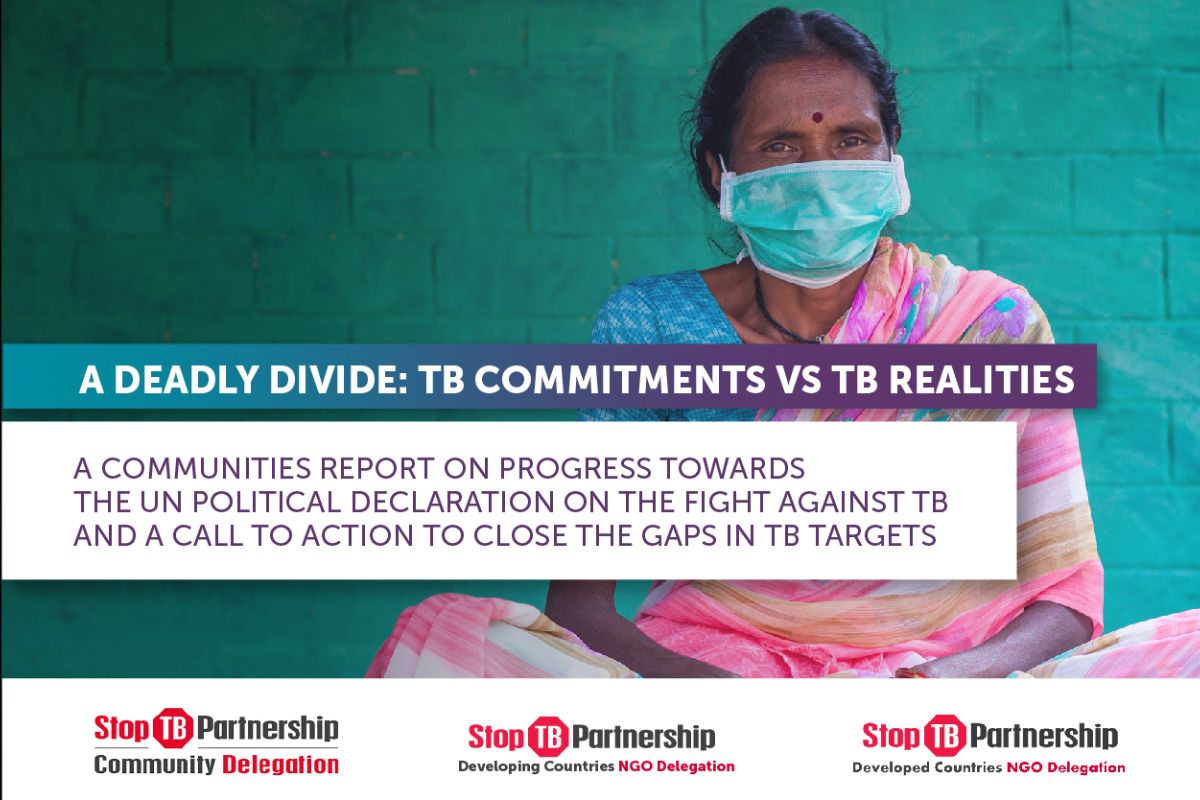 Geneva, Switzerland, 10 December 2020 - Tuberculosis (TB) remains one of the world’s biggest infectious killers, resulting in 15 million unnecessary deaths in the last decade. TB is the leading cause of death among people living with HIV. Despite grand promises by the world’s leaders at the United Nations High-Level Meeting on TB in 2018, we have seen insufficient progress to fulfil the targets and commitments contained within the Political Declaration on TB.

This deadly divide between words and action, and in the level of resources available to countries with a high burden of TB, has been documented by TB-affected communities and civil society in a groundbreaking report, A Deadly Divide: TB Commitments versus TB Realities. The new report, which complements the 2020 Progress Report of the UN Secretary-General, outlines the urgent need for a TB response that is equitable, community-led, right-based, and people-centered.

Developed by the Stop TB Delegations that represent Affected Communities, Developing Country NGOs, and Developed Country NGOs, with inputs from 150 community partners from over 60 countries, the report provides operational guidance on how countries and other stakeholders can realize the necessary paradigm shift. The people behind the report represent an unrelenting global movement of people affected by TB demanding that their rights be recognized and realized.

A Deadly Divide includes a Call to Action that focuses on six key Areas of Action, based on the 5 key asks that TB communities presented at the United Nations High-Level Meeting on TB in 2018, with the addition of a sixth Area of Action on COVID-19. These are: 1) reaching all people through TB detection, diagnosis, treatment, care and prevention; 2) making the TB response rights based, equitable and stigma-free, with communities at the center; 3) accelerating the development of, and access to, new tools to end TB; 4) investing the funds necessary to end TB; 5) committing to multisectoral accountability and leadership on TB; and 6) leveraging COVID-19 as a strategic opportunity to end TB.

Welcoming the report, and in recognition of Human Rights Day, Dr. Lucica Ditiu, Executive Director of the Stop TB Partnership, said, “TB is not just a health issue – it is first and foremost a human rights and social justice issue. Unfortunately, the TB response has been a human rights disaster. 4,000 unnecessary deaths each day represent a grave and unforgivable violation of the human rights of each of those people and their families.”

“We must learn from the past and never again allow a situation where a person’s place of birth, ethnicity, race, religion, economic status, or vulnerability influences the tools and quality of care that are available to them,” Dr. Ditiu continued. “To end TB, we need comprehensive human rights policies and programs at the center of the TB response, and this must be adequately funded through mechanisms, such as Stop TB’s Challenge Facility for Civil Society.”

The Call to Action builds on the 2019 Declaration of the Rights of People Affected by TB, in which the global TB community reaffirmed the range of human rights of particular relevance for them, and called for a TB response that protects and promotes the human rights of people affected by TB.

The report and accompanying advocacy and media toolkit are now available in English, with translations in Arabic, French, Portuguese, Russian, and Spanish to be released next week.

Full news alert including reactions from partners can be viewed here.