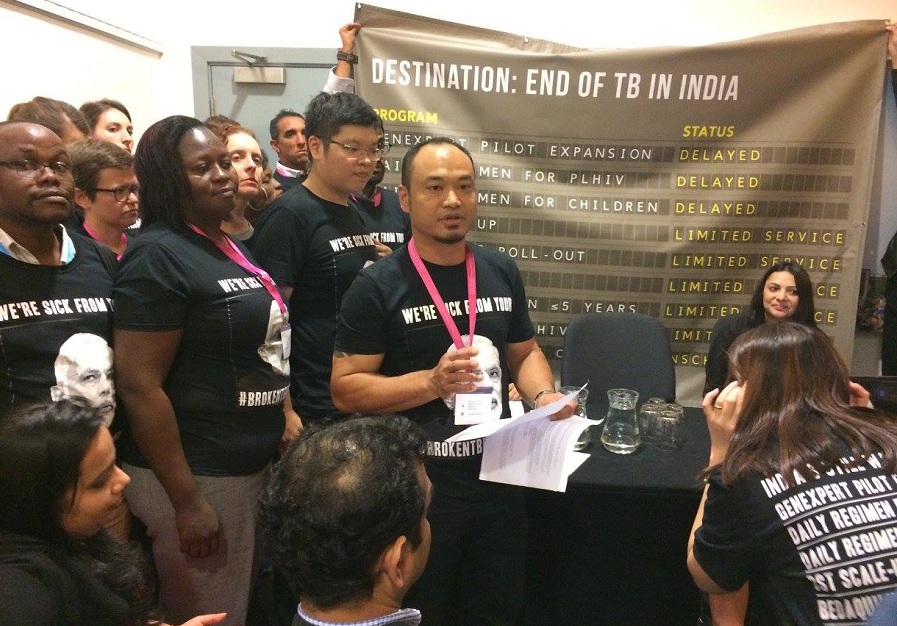 Activists take over a session at the Union conference in Liverpool bringing awareness and attention to a number of broken promises by the Indian government to address a growing drug-resistant TB epidemic that burdens the nation.

The nine gaps identified by the activists include:

These unaddressed promises and action come in light of new data released earlier this month by the World Health Organization in its annual report on TB, which found that 29% of all TB deaths in the world occur in India. The report further estimates that 1,400 Indians die each day from TB, a disease that is both preventable and curable. Improved TB surveillance data from India resulted in the WHO upwardly revising its estimates of the global TB epidemic to 10.4 million new TB cases and 1.8 million TB deaths in 2015.

Taking the podium, one of the activists from India read a statement describing the community-level impact of inaction by the Modi government of India on TB. “In my own state, Nagaland, we have poor infrastructure for diagnosing TB, people are not aware of TB,” said Ketho Angami, a TB activist based in Northeast India. “There is no spirit of partnership between implementing agencies and civil society networks, and the release of TB funds from the state government has been delayed for more than a year.”

The action is part of a bigger campaign called #brokenTBpromises that has counted up each day that has passed since the Indian government announced it would rollout FDC treatment for children and people with HIV in December 2014. By today’s count, this promise has gone unfulfilled for 662 days. Recently the Indian government has placed orders for the FDCs, but access and availability to treatment for impacted communities through TB treatment centers remains to be seen.