The #RightToPreventTB campaign focuses attention on the urgent need to scale-up TB preventive treatment as a matter of human rights. 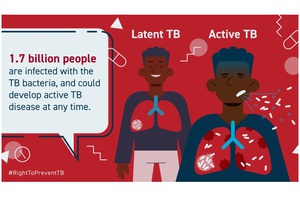 To mark World TB Day, Treatment Action Group and civil society partners in 11 countries launched the #RightToPreventTB campaign to focus attention on the urgent need to scale-up TB preventive treatment as a matter of human rights.

It’s now easier than ever to prevent TB before it develops into active disease. While TB preventive treatment was once long and difficult to tolerate, scientists have developed effective new regimens using a drug called rifapentine that last only one or three months. These breakthrough treatments, called 1HP and 3HP, can help end TB worldwide — but too few people have access to them. The World Health Organization (WHO) reports that only 29% of the 2018–2022 target of 30 million people have received TB preventive treatment.

People at risk of developing TB — like close contacts of someone living with TB and people living with HIV — have the #RightToPreventTB, and share in the benefits of scientific progress. Join the campaign in calling for urgent action to make 1HP and 3HP available to all, in line with the WHO’s Call to Action 2.0: A global drive to scale up TB prevention.

The campaign site has social media resources, videos of people who have taken 3HP, interviews with civil society leaders working on TB prevention, and links to advocacy letters, messaging, treatment literacy guides, and other resources. The #RightToPreventTB site is meant to be a kind of "base camp" for activists and communities working to share the benefits of TB prevention and will be regularly updated with new resources and campaign materials.

If you're already advocating for TB preventive treatment in your community, please share what you're doing on social media using the #RightToPreventTB hashtag!