WHO releases an update to its consolidated guidelines on the detection of TB and drug-resistant TB, accompanied by an operational handbook to facilitate rapid implementation and roll out of rapid molecular tests. 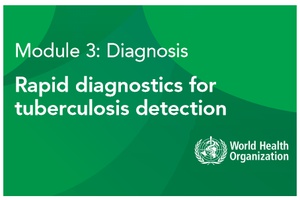 7 July 2021 | Geneva - The World Health Organization (WHO) has issued an update to its consolidated guidelines on the detection of TB and drug-resistant TB. The guidelines are accompanied by an operational handbook to facilitate rapid implementation and roll out of rapid molecular tests by national TB programmes, ministries of health and technical partners.

Three new classes of technologies are included in this update: (1) moderate complexity automated NAATs, recommended for the initial detection of TB and resistance to rifampicin and isoniazid, providing more options for early diagnosis of TB and rifampicin-resistant TB but also addressing an important gap in the rapid diagnosis of isoniazid-resistant and rifampicin-susceptible TB; (2) low complexity automated NAATs, recommended for the detection of resistance to isoniazid and second-line anti-TB agents, which will improve access to testing of fluoroquinolones resistant at peripheral level; and (3) high complexity reverse hybridization-based NAATs, recommended for the detection of pyrazinamide resistance, representing the first molecular tests for resistance determination to this drug.

“Ensuring that everyone can obtain a rapid and accurate diagnosis, followed by treatment according to the latest WHO guidelines, will save lives and reduce suffering. Diagnostic options for people with TB and drug-resistant TB are increasing as featured in this WHO guideline update thanks to the engagement of manufacturers in new product development and researchers in generating evidence for policy.” said Dr Tereza Kasaeva, Director of the WHO Global TB Programme. “We call for rapid action and  stakeholder support in ensuring these updates are rapidly implemented to enable access to the latest technologies and innovations.”

Accelerated efforts to diagnose TB and drug-resistance are essential to end the global TB epidemic and achieve the targets of the political declaration of the UN high-level meeting, the WHO End TB Strategy, the UN Sustainable Development Goals, universal health coverage and the triple billion targets of WHO’s General Programme of Work.