The 2021 Political Declaration on HIV and AIDS, adopted by world leaders, commits to end HIV/AIDS and TB by 2030 and reverse the progress lost due to the COVID-19 pandemic. 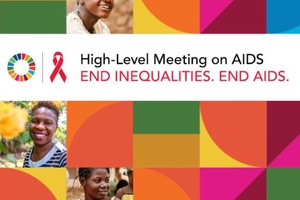 9 June 2021,Geneva, Switzerland – The Stop TB Partnership welcomes the adoption of the 2021 Political Declaration on HIV and AIDS by world leaders, committing to end HIV/AIDS and TB by 2030 and reverse the progress lost due to the COVID-19 pandemic. The Declaration was adopted yesterday during the opening of the United Nations High-Level Meeting on HIV/AIDS, which is taking place in New York from 8-10 June.

The Stop TB Partnership welcomes the inclusion in the Declaration of many of the key targets and asks outlined in ‘Priorities for People Affected by TB and TB/HIV for the UN High-Level Meeting on HIV/AIDS’, developed together with our partners in April 2021.

“The Political Declaration sets out a path for an ambitious joint response to HIV/AIDS and TB. It sends a strong message from world leaders that people living with HIV/AIDS and TB must not be left behind as the world continues to focus on the COVID-19 response,” said Dr. Lucica Ditiu, Executive Director of the Stop TB Partnership. “We call on Member States to fully implement this Declaration and we stand ready to work in partnership with them to fulfil their commitments to end HIV/AIDS and TB by 2030. We will fully engage in the preparation and organization of the next UN High-Level Meeting on TB in 2023 when we will review our collective achievements towards ending these diseases.”

Key TB commitments made by world leaders include:

Civil society partners of the Stop TB Partnership noted that the Declaration does not adequately address several priorities for an effective TB and TB/HIV response, including investment in participation, capacity, and leadership of key vulnerable population, and commitments to identify, monitor, and remove barriers related to human rights and gender that hinder and prevent access to health and social services.

On the eve of the UN High-Level Meeting, Dr. Ditiu joined UN, government, and civil society leaders at a high-level side event hosted by the World Health Organization titled ‘Ending TB Deaths among People with HIV: Step up the Momentum’. The recording is available here.