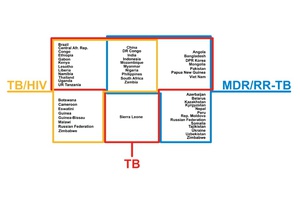 17 June 2021, Geneva | The World Health Organization (WHO) today released updated global lists of high burden countries for tuberculosis (TB), HIV-associated TB and multidrug/rifampicin-resistant TB (MDR/RR-TB). The new lists are for 2021–2025 and replace those previously used between 2016 and 2020

The lists provide a focus for global action on TB, HIV-associated TB and drug-resistant TB in the countries where progress is most needed to achieve the targets set in WHO’s End TB Strategy, the political declaration of the United Nations (UN) High-Level Meeting on TB held in 2018 and the UN Sustainable Development Goals (SDGs). They also help to build and sustain national political commitment and funding in the countries with the highest burden in terms of absolute numbers or severity and promote global monitoring of progress in a well-defined set of countries.

Following extensive consultation, the new lists have been defined using the same criteria as those used for the previous 2016-2020 lists, combined with the latest estimates (for 2019) of the incidence of TB, HIV-associated TB and rifampicin-resistant TB that were published in WHO’s Global Tuberculosis Report 2020.

For detailed information about the new lists, click here.