A 4-month daily regimen of rifapentine and moxifloxacin was noninferior to the standard 6-month regimen for tuberculosis treatment among people with HIV enrolled in a phase 3 clinical trial, researchers reported at CROI. 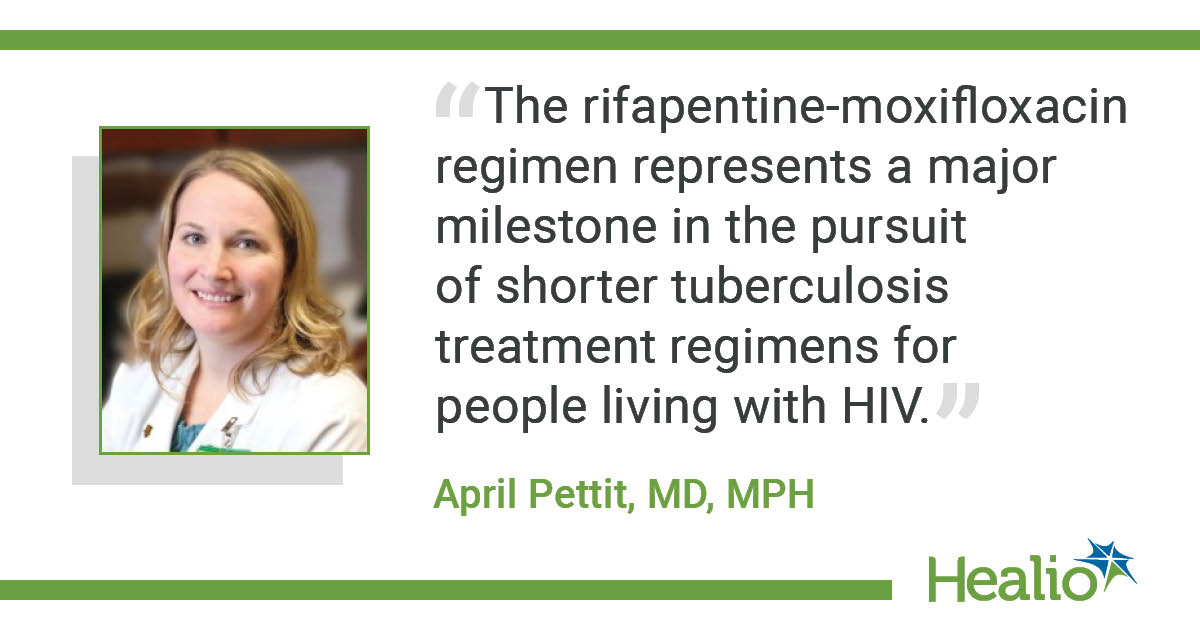 Through the TB Trials Consortium Study 31 an international, randomized, open-label, phase 3 noninferiority trial Pettit and colleagues compared patients receiving one of two 4-month RPT-based regimens or the 6-month control regimen. According to the study, one 4-month regimen replaced rifampin with RPT 1,200 mg (RPT regimen) and the other replaced both rifampin with RPT 1,200 mg and ethambutol with MOX 400 mg (RPT-MOX regimen). Additionally, participants with HIV on efavirenz (EFV)-based ART were enrolled in a staged fashion to allow studies of drug-drug interactions between RPT and EFV.

Pettit and colleagues enrolled 2,516 participants from 13 countries in sub-Saharan Africa and Asia, as well as from the Americas. Of these participants, 214 (8%) had HIV and all were on EFV-based ART at baseline or started within 8 weeks of enrollment.

“The rifapentine-moxifloxacin regimen represents a major milestone in the pursuit of shorter TB treatment regimens for people with HIV,” Pettit said.

When it comes to adherence regardless of the disease shorter regimens generally tend to garner more buy-in from patients. As we have seen in other microbial diseases (eg, hepatitis C), shorter regimens are more attractive to patients, especially in a population already rife with pill burden, like our HIV population (although this is much improved lately). A shorter duration of treatment for a very contagious, communicable disease like TB would certainly seem more viable and feasible, ease patients’ burden and, it is hoped, translate to a more convenient “quick-in-quick-out” treatment completion with compliance for TB while we continue to manage their long-term ART for HIV both of which are and remain important public health issues.