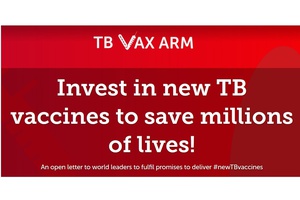 You can find all campaign materials, the Open Letter, and supporting factsheet in the toolkit at https://spark.adobe.com/page/rkJgh4Ar8T8hN/

This effort has been led by a group of TB survivors from the TB Vax ARM and has been signed by members of the global TB community from almost all G20 states and 57 organizations across the world.

Everyone in civil society is encouraged to amplify the letter and post campaign resources, including testimonies from the TB survivors who signed the letter, from now until the joint G20 Finance & Health Ministers meeting on 29 October.

Please share widely, and thank you for your advocacy for new TB vaccines!