PLOS ONE publishes TAG’s rigorous, peer-reviewed calculation of investments in the development of this life-saving TB medicine. 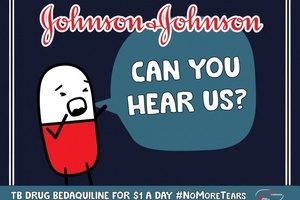 September 18, 2020 – Treatment Action Group (TAG)’s independent, peer-reviewed analysis found public investment in the development of bedaquiline was up to five times that of Johnson and Johnson. This finding appears in the new PLOS ONE article, Public Investments in the Clinical Development of Bedaquiline. Bedaquiline forms the backbone of safer, World Health Organization-recommended all-oral regimens for drug-resistant tuberculosis (DR-TB).

“This analysis is the first-ever rigorous costing of the development of a novel TB medicine,” said Dr. Dzintars Gotham, an independent researcher and TAG-contracted lead author of the study. “We found that, even after accounting for capitalization and risk adjustment, public investments far exceeded those of Johnson & Johnson, the proprietor of bedaquiline.”

The analysis found that total public investments amounted to USD $455-747 million, while Johnson & Johnson’s investments were $90-240 million (if capitalized and risk-adjusted, $647-1,201 million and $292-772 million, respectively). Total public investments thus exceeded those of the company by a factor of 1.6-5.1. Despite significant public investment and contribution to the drug’s development, bedaquiline’s price remains a barrier to scaling up treatment coverage, putting patients at risk for poor outcomes from older, less effective treatments.  The Stop TB Partnership’s Global Drug Facility recently secured a price reduction and volume-contingent free goods agreement that when combined translate to up to 32% savings on bedaquiline, but the complicated arrangement underlying this step forward reflects Johnson & Johnson’s refusal to cede to activist calls to price bedaquiline at $1/day.

“A lot of research has focused on the role public funding plays at early stages of drug discovery and development. Our findings show that in TB, public investments extend well into later stages of research and development, and are not limited to clinical trials,” remarked Lindsay McKenna, TAG’s TB Project Co-Director. “The public plays a remarkable role in developing life-saving innovations, yet pharmaceutical companies unjustly remain the sole arbiters of determining what these innovations cost and subsequently who has access to them.”

As governments step up to fund much needed innovations to address the TB epidemic as well as the COVID-19 pandemic, public funding for product development must come with conditions that promote transparency and equitable access, and include robust enforcement mechanisms to ensure that public goods remain in the public domain and that people are always placed above profits.

About TAG: Treatment Action Group (TAG) is an independent, activist and community-based research and policy think tank fighting for better treatment, prevention, a vaccine, and a cure for HIV, tuberculosis, and hepatitis C virus. TAG works to ensure that all people with HIV, TB, and HCV receive lifesaving treatment, care, and information. We are science-based treatment activists working to expand and accelerate vital research and effective community engagement with research and policy institutions.