WHO advocacy and communications package to support awareness building and drive action across all levels, in the lead up to and on World TB Day. 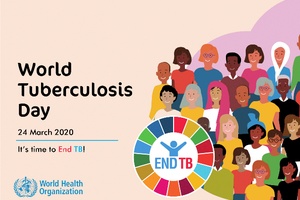 Millions around the globe will come together to mark World TB Day on 24 March. Under the theme “It’s Time”, the spotlight this year is on urgently accelerating the TB response to save lives and end suffering, building on high level commitments by Heads of State at the 2018 UN High-Level Meeting on TB. It is critical that the commitments and action emerging from the high level meeting are sustained and realized at national and local levels. Any slackening of commitment and action would impede efforts towards universal access to TB prevention and care, and ensuring no one is left behind.

On World TB Day, the World Health Organization (WHO) calls on everyone to keep the promise to:

“We are at a crossroads for the fight to end TB,” said Dr Tereza Kasaeva, Director of WHO’s Global TB Programme. “It’s time to unite forces and take the path of success that will save lives and end suffering. WHO will stand by every country, partner, society or person that decides TB has no place in its future. Let us stand together to keep our promises to end TB -- not only on World TB Day, or this year, or next year -- but every day, until the epidemic is conquered. It’s time to END TB!”

WHO has developed an advocacy and communications package to support awareness building and drive action across all levels, in the lead up to and on World TB Day. You can access the package here.