The report — Tuberculosis Research Funding Trends, 2005–2018 — presents new data on funding for TB research and development in 2018 and analyzes trends in spending since 2005. 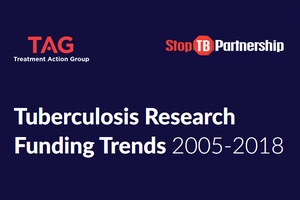 New York City, December 10, 2019—Global funding for tuberculosis (TB) research totaled US$906 million in fiscal year 2018, an increase of US$134 million from 2017, according to a report released today by Treatment Action Group (TAG) and the United Nations-hosted Stop TB Partnership.

The report—Tuberculosis Research Funding Trends, 2005–2018—presents new data on funding for TB research and development (R&D) in 2018 and analyzes trends in spending since 2005. The report is a critical accountability tool for ensuring that all stakeholders—led by governments and including the private sector, philanthropies, and multilateral organizations—meet global goals for supporting TB R&D. The 2018 funding data represent the baseline against which the global community will measure governments’ performance against the target of spending US$2 billion on TB research annually, a commitment made in the political declaration of the 2018 United Nations High-Level Meeting on TB.

Although higher than ever, the 2018 funding total still falls more than half-way short of the UN’s US$2 billion annual target. To meet global TB elimination goals, the world must now spend significantly more than US$2 billion a year in order to overtake the shortfall created by underspending in 2018 and previous years.

Recognizing this, the Stop TB Partnership’s newly released Global Plan to End TB, 2018–2022 calls for US$2.6 billion per year for TB research.

“The US$134 million increase in TB research funding is cause for celebration and shows that the tireless efforts of TB partners around the world are getting results,” said Lucica Ditiu, Executive Director of the Stop TB Partnership. “But this still leaves us short of the US$2 billion annual funding figure endorsed at the UN High-Level Meeting. Because we're off track, we'll now need to spend more each year to make up the deficit. We can’t afford to coast on recent momentum if we are serious about ending TB—it’s time to put our money where our mouths are.”

Only three countries—the United Kingdom, the Philippines, and South Africa—met their “fair share” targets by spending at least 0.1% of their overall R&D expenditures on TB research. The public sector comprised more than two-thirds of total 2018 spending. Sixty-seven percent of public-sector spending came from the U.S. government, which gave US$125 million more than every other government combined. The United Kingdom was the second largest public sector funder; India led spending among the BRICS nations.

The private sector only contributed nine percent of total TB R&D funding this year, or US$86 million—a number that has remained flat since 2015.

“It is critical that governments recommit to meeting the fair share funding targets put forward by the global advocacy community,” said Mike Frick, TAG TB project co-director. “As part of giving their fair share, all countries must develop robust norms and standards that will concentrate resources on the most pressing research gaps and public health needs and ensure that all people will be able to access the benefits of scientific progress against TB. Equity must be the guiding principle of TB research financing.”

In addition to the funding data, this year’s report features interviews with ten TB activists involved in TB research advocacy. A key takeaway is that increased research funding, while essential, is only one piece of the puzzle. These activists offer invaluable views on the importance of creating space for community engagement and accountability in all aspects of TB R&D. The activists single out closing widening gaps in the ability of people to access the benefits of TB research as a critical issue for the global TB research agenda.

TAG is releasing this 14th consecutive report on TB research funding to coincide with the 32nd Stop TB Partnership Board Meeting in Jakarta, Indonesia. The report is the longest-running record of TB research funding trends. This year’s report was written by Liz Barr and edited by TAG’s Mike Frick and Erica Lessem.

About TAG: Treatment Action Group is an independent, activist, and community-based research and policy think tank fighting for better treatment and prevention, a vaccine, and a cure for HIV, TB, and hepatitis C virus (HCV). TAG works to ensure that all people with HIV, TB, and HCV receive lifesaving treatment, care, and information. We are science-based treatment activists working to expand and accelerate vital research and effective community engagement with research and policy institutions.