The WHO, Ministries of Health and Finance, donors, implementers, technical assistance providers, civil society, and communities must work together to ensure rapid implementation. 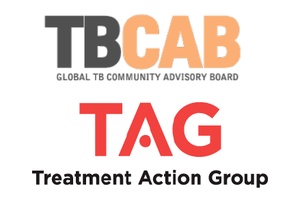 17 August 2018 – The Global Tuberculosis Community Advisory Board (TB CAB) and Treatment Action Group (TAG) welcome the new World Health Organization (WHO) recommendation of injectable-free regimens for the treatment of rifampicin- and multidrug-resistant tuberculosis (RR/MDR-TB). The new WHO recommendation ushers in a long-awaited era in which medicines with strong evidence for their use replace toxic medicines with little evidence of effectiveness.

As announced today in a WHO Rapid Communication, the new preferred standard treatment regimen for RR/MDR-TB is composed of bedaquiline, linezolid, levofloxacin (or moxifloxacin), and cycloserine and clofazimine. The injectable agents, which showed poor efficacy in addition to high toxicity, have been relegated to use only when a regimen with 4–5 effective drugs cannot otherwise be composed. Kanamycin and capreomycin are no longer recommended.

"The TB CAB and TAG commend the WHO for undertaking the development of consolidated treatment guidance, and issuing an open call for data to do so. We also acknowledge the tremendous contributions of the country programs, drug sponsors, and research teams that responded to the call and enabled the development of evidence-based treatment guidelines," acknowledged Patrick Agbassi and Carolina Morán Jara, co-chairs of the TB CAB. "We urge all actors — including country governments, donors, implementing partners, technical assistance providers, civil society, and communities — to work together to rapidly transition TB programs to the new longer regimens."

"The new longer regimens should end the unnecessary and unethical subjugation of patients to the avoidable disability, pain, and other serious risks associated with the injectable agents," said Marcus Low, Technical Co-Lead of the TB CAB. "However, there are multiple challenges with the WHO communication. The continued recommendation of the shorter regimen is perplexing given the demotion of five of the seven medicines that compose it, and that a phase III randomized controlled trial showed the shorter regimen was not as good as the previously recommended longer regimen. This raises concern that the recommendation for continued use of the shorter regimen is not grounded in evidence, nor in patients’ best interests." The new guidelines also highlight the importance of on-going research and development efforts to inform the optimal duration of treatment with the new preferred regimens.

"The new guidelines challenge global and national actors to ensure that all affected have access to medicines needed to benefit from the new longer regimens," said Lindsay McKenna, Senior TB/HIV Project Officer of Treatment Action Group and Coordinator of the TB CAB. The new recommendation underscores the urgency of ensuring the affordability of the recommended medicines, especially bedaquiline, clofazimine, and linezolid. We reiterate the TB CAB’s previous call for Janssen Pharmaceuticals — a division of Johnson & Johnson — to lower the price bedaquiline to US$32 per month. Further transparent, pre-set volume-based reductions must be negotiated with global partners, including civil society.

Also essential to rolling out the new longer regimens is ensuring that tests and other necessary monitoring equipment are widely available. "Given the importance of drug resistance profiling to implementing the new treatment guidelines, the ability to detect drug resistance must be rapidly scaled up," remarked Khairunisa Suleiman, Technical Co-Lead of the TB CAB. "In addition to scaling up existing drug susceptibility testing (line probe assays and liquid culture), there is also urgent need for sequencing technologies (which can detect multiple genetic mutations that confer resistance to drugs) adapted for use in low resource settings and clear WHO guidance on their use." Tests and training to monitor for nerve and liver damage, changes in the heart’s electrical activity and in the body’s potassium levels, depression, and psychosis will be critically important to ensuring that patients can safely complete treatment with the new preferred regimens.

In sum, we laud the recommendation for the new longer regimens, and urge their rapid implementation, which will require access to appropriate medicines, tests, and monitoring. We remain concerned by the continued recommendation of the shorter regimen.

The mixed messages resulting from the Guideline Development Group (GDG) meeting held in July 2018 reinforce the concerns raised by civil society and community groups regarding the WHO guideline development process. We appreciate the receptivity of the WHO, and in particular Global TB Program Director Tereza Kasaeva, to addressing these. We look forward to future collaboration to resolve remaining issues, which include 1) transparency regarding the process and criteria by which the WHO selects GDG members; 2) the need for increased GDG member capacitation to allow for optimal participation in GDG meetings; 3) reforms to the WHO’s conflict of interest policy; 4) the establishment of a mechanism for public comment on the selection and framing of the questions that inform what data are collected and how they are analyzed (PICO questions); 5) the speed and regularity at which guidelines are updated, especially in response to emerging evidence, and how to best integrate updates; 6) the inconsistent and undue consideration of cost in forming recommendations; 7) the need for more regular and independent evaluations of WHO guidance documents via end-user surveys; and 8) harmonization of the expectations of the WHO and stringent regulatory authorities regarding quality and outcomes of interest for phase III TB trials.

The Global TB Community Advisory Board (TB CAB) is a group of strong, research-literate community activists from HIV and TB networks in Asia, Europe, Africa, and North and South America. Founded in 2011, the TB CAB acts in an advisory capacity to product developers and institutions conducting clinical trials of new TB drugs, regimens, diagnostics, and vaccines, and provides input on study design, early access, regulatory approval, post-marketing, and implementation strategies. The TB CAB is dedicated to increasing community involvement in TB research and access to tools to fight TB, and mobilizing political will.

Treatment Action Group (TAG) is an independent, activist, and community-based research and policy think tank fighting for better treatment and prevention, a vaccine, and a cure for HIV, TB, and hepatitis C virus (HCV). TAG works to ensure that all people with HIV, TB, and HCV receive lifesaving treatment, care, and information. We are science-based treatment activists working to expand and accelerate vital research and effective community engagement with research and policy institutions.