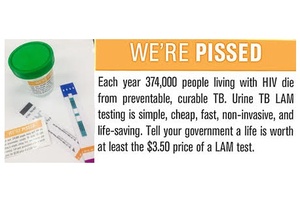 22 July 2018, Amsterdam, Netherlands – At the TB 2018 pre-conference held on Sunday 22 July 2018, before the International AIDS Conference, activists from around the globe called on their countries, development partners, and donors, to end the unacceptable death rates caused by tuberculosis (TB) in people living with HIV by immediately scaling up the use of TB LAM testing. TB remains the leading killer of people living with HIV and the TB LAM diagnostic test—a simple, inexpensive and life-saving test for detecting TB in people with advanced HIV who are at highest risk of dying from TB—is a worthwhile investment.

Activists from Treatment Action Group, the Global TB Community Advisory Board, AIDS & Rights Alliance for Southern Africa, the Global Coalition of TB Activists, the International Community of Women Living with HIV Eastern Africa, Médecins Sans Frontières, Section 27, and the Treatment Action Campaign—with support from the Stop TB Partnership and the Center for Artistic Activism—set up a TB LAMonade stand, to call attention to the need for all high TB/HIV burden countries1 to scale up national implementation of the urine-based test. They handed out urine-collection cups filled with lemonade and labeled “WE’RE PISSED.” Mock TB LAM test strips included the simple message, “TB = #1 killer of people living with HIV. TB LAM testing saves lives.”

“TB is preventable and curable, yet every year hundreds of thousands of people with HIV die from TB,” said Erica Lessem, deputy executive director - TB for Treatment Action Group. “TB LAM testing helps prevent needless deaths in those most at risk.”

“TB LAM is a great tool to save lives of people living with HIV,” noted Dr. Lucica Ditiu, executive director of the Stop TB Partnership. “We encourage TB programs to use all the tools available to reach global targets to end TB, and TB LAM testing is no exception.” The test, along with all other TB diagnostics and treatments, is available through the Stop TB Partnership’s Global Drug Facility.

The TB LAM test, manufactured by Abbott (formerly Alere), costs just USD3.50 and requires no electricity or reagents. It has been shown in clinical trials to allow earlier TB diagnosis in people with advanced HIV, and to reduce TB mortality. TB LAM testing has been recommended by the World Health Organization for use in people with advanced HIV since 2015, and Global Fund and PEPFAR funding can be used for TB LAM procurement and implementation. Yet only a few countries (eSwatini, South Africa, and Uganda) have scaled up TB LAM testing nationally.

“Our governments are failing to protect their most vulnerable citizens,” remarked Lynette Mabote, Regional Programmes Lead at the AIDS and Rights Alliance for Southern Africa (ARASA). “Health is a human right, and access to TB LAM testing to allow life-saving rapid diagnosis and treatment is essential in all countries with high burdens of TB and HIV.”

About Treatment Action Group (TAG): TAG is an independent, activist, and community-based research and policy think tank fighting for better treatment and prevention, a vaccine, and a cure for HIV, TB, and hepatitis C virus (HCV). TAG works to ensure that all people with HIV, TB, and HCV receive lifesaving treatment, care, and information. We are science-based treatment activists working to expand and accelerate vital research and effective community engagement with research and policy institutions.

About the Global TB Community Advisory Board (TB CAB): The TB CAB is a group of strong, research-literate community activists from HIV and TB networks in Asia, Europe, Africa, and North and South America. Founded in 2011, the TB CAB acts in an advisory capacity to: product developers and institutions conducting clinical trials of new TB drugs, regimens, diagnostics, and vaccines; and provide input on study design, early access, regulatory approval, post-marketing, and implementation strategies. The TB CAB is dedicated to increasing community involvement in TB research and access to tools to fight TB, and mobilizing political will.

About the AIDS & Rights Alliance for Southern Africa (ARASA): ARASA is a regional partnership of over 113 non-governmental organisations working together to promote a human rights based response to HIV, SRH and TB in southern and east Africa, through capacity building and advocacy.

About the Global Coalition of TB Activists (GCTA): GCTA is a global platform for those affected to make their voices heard at every level. Over the past year, the GCTA has established regional, national, and sub-national coalitions of TB advocates. Activists Coalition on TB – Asia-Pacific (ACT AP) in the Asia-Pacific region, Activists Coalition on TB in the Africa region, TB People in Europe, and Red de Personas Afectadas por Tuberculosis en Latino América y El Caribe (REDTBLAC) in the Americas are the regional platforms set up globally. In India, GCTA was instrumental in the formation of Touched by TB, a coalition of people affected by TB, and a sub-national coalition in the North East region. Since its inception in October 2013, the GCTA has contributed significantly to the global TB agenda through its network of over 300 members affected by TB.

About Médecins Sans Frontières (MSF): MSF is an international, independent medical humanitarian organization that provides medical assistance to people affected by conflict, epidemics, disasters, or exclusion from healthcare. MSF’s teams are made up of tens of thousands of health professionals, logistic and administrative staff - bound together by MSF’s charter. MSF’s actions are guided by medical ethics and the principles of impartiality, independence and neutrality. MSF is a non-profit, self-governed, member-based organisation. MSF was founded in 1971 in Paris by a group of journalists and doctors. Today, MSF is a worldwide movement of more than 42,000 people.

About SECTION27: Section 27 is a public interest law centre that seeks to achieve substantive equality and social justice in South Africa. Guided by the principles and values in the Constitution, SECTION27 uses law, advocacy, legal literacy, research and community mobilisation to achieve access to healthcare services and basic education. SECTION27 aims to achieve structural change and accountability to ensure the dignity and equality of everyone.

About the Treatment Action Campaign (TAC): TAC is one of the most important civil society organisations active on AIDS in the developing world. TAC continues represents users of the public healthcare system in South Africa, and to campaign and litigate on critical issues related to the quality of and access to healthcare.