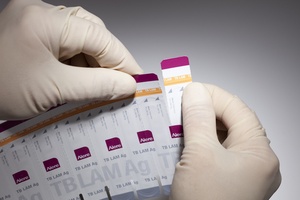 In an open letter sent to the leadership of the President’s Emergency Plan for AIDS Relief (PEPFAR) on 5 April 2018, advocates congratulated PEPFAR for its continued commitment to ensuring support for evidence-based programming to address HIV and TB/HIV, but expressed their deep concern about underutilization of the TB-LAM test - a simple, rapid, urine-based, inexpensive point-of-care diagnostic proven to reduce TB deaths in people with HIV.

In light of recent findings about TB-LAM test’s life-saving potential with expanded use in people with HIV, and in anticipation of the final Country Operating Plan (COP) 18 approval meetings (April 10-13 and April 17-20), the signatories urged PEPFAR to ensure that 2018 COPs for all high TB/HIV burden countries include TB-LAM testing, including procurement, nationwide scale up, and expanded use of the test.

“To ensure the rights to health, life, and the benefits of scientific progress of people with HIV, we urge PEPFAR to take all steps possible to increase access to TB-LAM testing and prevent further needless TB deaths in people with HIV. As such, we ask that you:
1. Require that high TB/HIV burden countries include TB-LAM testing procurement and nationwide scale up in their 2018 COP (or Regional Operating Plan) as a condition of receiving PEPFAR funding, and
2. Encourage countries to include in such plans the expanded use of TB-LAM:
a. as a hospital-based screening test (along with GeneXpert MTB/RIF Ultra) for all people with HIV, regardless of CD4 count or symptoms,
b. in outpatient settings, to all people with HIV with CD4 counts < 200 cells/mm.”

The signatories requested a response by 10 April 2018.