Offline: The G20 and health—platitudes and broken promises 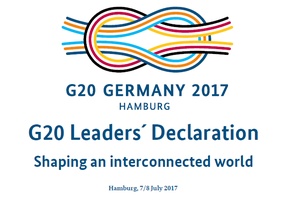 Imagine “Anycountry”. A low-income nation-state with a weak health system. People have begun to report a mysterious respiratory infection that is rapidly fatal. The cause is an unknown virus. A localised outbreak quickly spreads from village to village. The virus is not only extremely pathogenic but also highly transmissible. The epidemic soon crosses the country's border to neighbouring states. A global health emergency beckons. This scenario is fictional. But earlier this year G20 health ministers were locked in a room in Berlin to test their ability to deal with such a global health crisis. Could the multilateral system control a newly emerging pandemic? Was WHO better prepared than it had been for Ebola? Are the International Health Regulations working? Last weekend, the new Director-General of WHO, Dr Tedros, addressed G20 Heads of State assembled in Hamburg. It was the first time WHO had been invited to a Summit that is usually focused on finance and economics. His conclusion was fearful: “we are not well prepared”, he concluded. Epidemics “represent some of the greatest risks to the global economy and security that we face today”. He invited Chancellor Merkel, Presidents Trump, Xi, and Macron, Prime Minster May, and others to recall past pandemics. Influenza in 1918: 50 million deaths. SARS: a US$60 billion bill to be paid by the global economy. How big is the risk? WHO, he said, receives 3000 signals of potential epidemic outbreaks every month. What if one of these outbreaks turned out to be a virus of unprecedented pathogenicity and transmissibility? With 3 billion airline travellers annually, the danger of a global catastrophe was all too real. No amount of wise economics or deft financing could protect the world from disaster. The solution? Universal health coverage as the first-line defence and a foundation for global health security. He called for money, political commitment, a better understanding of country and global weaknesses that would permit an outbreak to take hold, and more research. Did his audience pay attention? Not nearly enough.

The 15-page final Declaration from G20 leaders was full of platitudes. The goal of the G20 is to deliver “strong, sustainable, balanced, and inclusive growth”. Global health appeared on page 8. The G20 recognised that their nations had a “crucial role” in pandemic preparedness. They agreed that strong health systems are important. They called on the UN to keep global health a priority. They stressed the need for cooperative action. The value of the health workforce. The importance of the International Health Regulations. Polio eradication got a mention. Migration too. “We support the WHO's central coordinating role”, they said. They advocated more money for WHO's work. They called for national action plans to tackle antimicrobial resistance. And they suggested a new International Research and Development Collaboration Hub for product development. But these warm words were missing one thing—concrete and specific actions.

The G20 is a growing threat to global health. Let's give credit to Angela Merkel. Germany's Chancellor had made health a priority for her country's G20 Presidency. At last week's launch of The Lancet's Germany and Health Series in Berlin, Minister of State Helge Braun gave his government's full commitment to supporting and strengthening WHO. Merkel had specifically (and unusually) invited WHO's attendance. Why? Because she recognised that global health is the foundation of economic success, “a pivotal subject for the G20”. But there was no substance to her words. Planning for this disappointing result began last December. A Health Working Group convened in March, 2017, and health ministers gathered for their crisis simulation in May. Their concerns coalesced around the risks of dangerous pathogens. But their promises proved empty. G20 leaders enjoyed a spectacular evening in Hamburg last weekend listening to Beethoven's Ode to Joy, the European Union's anthem. The “Ode” was based on a poem written in 1785 by a physician—Friedrich Schiller. “You millions, I embrace you”, wrote Schiller. A poetic rendition of universal health coverage? Not quite. The G20 is an exclusive group of nations accounting for three-quarters of global trade. Their first and only concern is economic growth. For the first time, a G20 Presidency had placed global health at the centre of the group's discussions. What an opportunity. They flunked it.