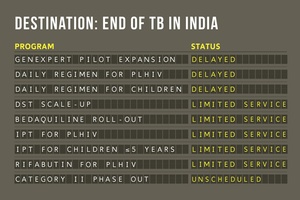 “The way India responds to the TB epidemic will have a global impact. As India moves forward in development and technology, it would be a shame to leave TB behind. Part of this is to quickly implement tested successful models that benefit patients.” –Time for TB, TB Support Group

On April 23, 2015, the Honorable Union Minister for Health and Family Welfare, India, Shri Jagat Prakash Nadda launched the TB Free India campaign. More than a year later, the campaign has yet to leave the station. From diagnosing to preventing to treating TB, India’s government has failed to implement the policies and programs required to end TB in India. Each year 2.2 million Indians fall sick from TB and 250,000 die from this disease that has been preventable, treatable, and curable for decades. Every death due to TB is avoidable and represents the failure of India’s government to uphold the human rights of its citizens.

Nine policy changes announced by India’s Revised National Tuberculosis Control Program (RNTCP) have had their implementation delayed time and time again. People with and vulnerable to TB in India cannot bear anymore broken promises from their government. Join us in calling for Prime Minister of India Narendra Modi to fix his government’s #BrokenTBPromises, starting with the provision of daily fixed-dose combination (FDC) TB treatment to people with HIV and children. In December 2014, the RNTCP announced that it would provide FDCs to people with HIV starting in 104 districts in 5 states. As of August 1, 2016—579 days since the announcement in late 2014—the rollout of FDCs has yet to occur.

Starting on August 1, 2016, Treatment Action Group will publicly count up each day that passes without daily FDCs. We will only stop the count when daily FDCs are available to all people with HIV and children who need them nationwide. Join our count by following and re-tweeting messages from @TAGteam_tweets using the hash tag #brokenTBpromises and tagging @PMOIndia, the official twitter account of Prime Minister Narendra Modi. You can also write to Narendra Modi directly by filling out the short form found here: http://pgportal.gov.in/pmocitizen/Grievancepmo.aspx (scroll down the page until you see the icon “Write to the Prime Minister”). Write your own message, or use the template provided under the tab “Take Action,” found at the top of this page.

The provision of daily FDCs isn’t the only TB promise India’s government has failed to keep. As the count goes on, we will call on Prime Minister Modi to make good on several other TB programs and policies, including:

Until these programs and policies are in place, people affected by TB in India will be left waiting on the platform, staring down the empty tracks, for a TB elimination campaign that never arrived.

“Does patience never run out? Surely patience should be exhausted when there’s incontrovertible evidence that citizens are dying of a preventable disease because of the willful negligence of their government. The dossier on India and TB is not pretty; it’s dismal.” –Stephen Lewis, Co-director of AIDS-Free World and former United Nations Special Envoy for HIV/AIDS in Africa | Keynote address delivered at TB2016, Durban, South Africa, July 17, 2016