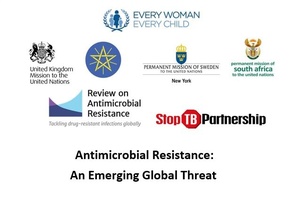 Held on Monday, 15th June, the event, ‘Antimicrobial Resistance: An Emerging Global Threat’, was co-sponsored by a diverse group of countries including the United Kingdom, Ethiopia, Sweden, and the UN Foreign Policy and Global Health group comprised of France, Thailand, Senegal, Norway, Brazil, South Africa, and Indonesia. The event comes a week after the G7 Group of Counties highlighted Antimicrobial Resistance (AMR) as a top priority for action on the global development agenda.

The global burden of infections resistant to existing antimicrobial medicines is growing at an alarming pace. Drug-resistant infections are already responsible for more than half a million deaths globally each year and could kill an extra 10 million people across the world annually by 2050, of which 2.5 million could be from drug-resistant tuberculosis according to the AMR Review’s estimates.

Addressing member states and guests, Lord Jim O’Neill, renowned economist and Chairman of the independent Review on AMR convened by the Prime Minister of the United Kingdom, said “By 2050 AMR infections will cost the world $100 trillion in lost economic output and kill more people than cancer if we do not take action. No new classes of antibiotics have been created for decades and our current drugs are becoming less effective as resistance increases. This is why we are calling for a global innovation fund of $2 billion dollars to fund the risky, expensive early stages of drug research.”

The event was also addressed by Dr. Joanne Carter, Vice Chair of the Stop TB Partnership Coordinating Board and Executive Director of RESULTS. “It was nearly two decades ago that drug-resistant TB was first characterized as ‘Ebola with Wings’. The AMR Review’s findings have brought to light the potentially massive scale and devastating impact of drug-resistant TB and other AMR infections in both human and economic terms. Decades of progress will be undone and the billions invested in the Global Fund to Fight AIDS, TB and Malaria and by national governments will be under threat unless we address this challenge now.”

The Stop TB Partnership also voiced its support for the call made by several member states for a United Nations High-Level Meeting on AMR to be held at UN Headquarters in New York in 2016.

Additional details on the event can be found on the Every Women Every Child website here.