Since February this year, doctors and nurses trained by WHO to use a web-based patient health information and guidance tool on a handheld tablet have been providing primary health care services to people in eastern Ukraine. Through the tablet, medical professionals have access to urgent care protocols and procedures based on WHO norms and standards, tailored to the Ukrainian context. The tool was developed to provide people-centred, real-time, comprehensive information and guidance. It can also give early warnings through syndromic and disease surveillance mechanisms. 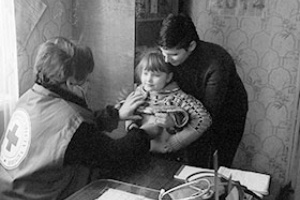 Sixteen teams known as mobile emergency primary health care unitsare currently working in eastern Ukraine, giving over 1600 consultations per week. Each team consists of a doctor, two nurses and a driver. WHO provides free medicines and is establishing a referral system for people living with tuberculosis and HIV as well as for mental health, paediatric services and expert care. The services are sensitive to both gender and vulnerability. More than 26 000 consultations have been conducted since the  units were set up.

The units operate through the International Medical Corps and the Ukraine Red Cross Society, with support from WHO, and with funds provided by the European Union Humanitarian Aid and Civil Protection department, the United Nations Central Emergency Relief Fund and the governments of Canada, Estonia and Israel. The United Kingdom Department for International Development, Finland and the Swiss Cooperation Office have also pledged support.