In her keynote speech at the 1st Eastern Partnership Ministerial Conference on Tuberculosis and Its Multi-Drug Resistance, held on 30–31 March in Riga, Latvia, Dr Zsuzsanna Jakab, WHO Regional Director for Europe, declared: "Europe is in a position to lead prevention, care and the innovation of new tools in the fight against TB, and to pave the way for TB elimination. It is only through regional collaboration and cooperation that we can achieve this goal, so that our children will live in a world free of TB." 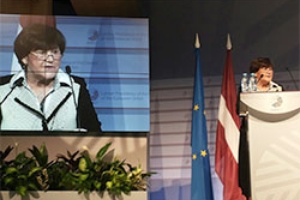 The Conference was held under the aegis of Latvia's Presidency of the Council of the European Union. The ultimate goal is to put an end to the tuberculosis (TB) epidemic by 2050.

Participants in the two-day event discussed a number of topics, including:

The Joint Riga Declaration on Tuberculosis and Its Multi Drug Resistance was the outcome of the event. It highlights a number of key areas to consider and review, including:

WHO and its partners will follow up on the implementation of the Riga Declaration, advocating it at the highest political levels in order to maximize its impact.

Despite great strides in the detection and care of individuals with TB in Europe, 1000 people still fall ill with the disease each day. MDR-TB is a serious burden not only on patients and their families, but also on health systems and economies. Over half of the estimated number of MDR-TB cases goes undetected and the WHO European Region accounts for almost a quarter of the global burden of MDR-TB.