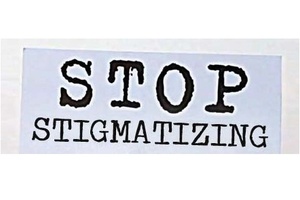 After years of relative quiet (1), advocacy in the global response to tuberculosis is growing louder and increasingly includes the voices of people who have been affected themselves (2). One priority identified by this growing movement is to stop the stigmatizing language still commonplace in research and practice. This is long overdue; indeed, stigma resulting from discriminatory terms may have discouraged the advocacy now calling for reformed discourse (3).

In 2012 Zachariah and colleagues called for an end to stigmatizing language in tuberculosis programs, an appeal supported by the Stop TB Partnership (4, 5). Unfortunately, three years later, the Stop TB Partnership’s guidance document on patient centered language remains in draft (6), and health professionals in many programs worldwide still use stigmatizing terms. These remain rife in journal articles, conference abstracts, and even some treatment guidelines, as well as in technical expert meetings.

It is no coincidence that the language used in tuberculosis—often called a disease of poverty—mirrors the stigmatizing language used to describe poor people in other domains of economic and social life. Traditional terms invoke metaphors of transgression and punishment rather than of dignity and cure. Phrases such as “treatment defaulter” and “initial defaulter” apply the moral judgment of loan nonpayment to describe patients who stop treatment or never start it. Other phrases, such as “tuberculosis suspect,” treat patients as if they had committed a crime, which may reinforce the legal penalties people with tuberculosis face in many parts of the world.

Labeling patients who do not complete treatment as “non-compliant” assigns blame and masks the underlying structural reasons for interrupting or ceasing treatment. These factors are external to the person with tuberculosis and include health system weaknesses, such as drug stockouts, high out-of-pocket expenses, and the shortcomings of research and development, which have left patients to rely on lengthy treatment regimens with high pill burdens and toxic, sometimes disabling, side effects.

Language shapes the terms of engagement through which people interact with health systems and medical research and, in doing so, can serve to either exclude people or empower them to participate as equal partners in their own care. Often the deleterious effects of tuberculosis discourse manifest through stigmatization, which begins when a group of people receive an undesirable label (7).

People have reported that the social and economic impact of stigma affects their willingness to undergo tuberculosis screening and to seek medical care after the onset of tuberculosis symptoms (8); such stigma has even led people to drop out of treatment programs (9, 10, 11). One large study found that 77% of patients with tuberculosis in Lima, Peru, experienced stigmatization and that community and home stigma significantly contributed to an increase in treatment intermittence or non-completion among patients with multidrug resistant tuberculosis. The same study showed that interventions such as psychological support and community mobilization for health rights had a more significant effect on participants’ outcomes than cash transfers, loans, or vocational training (12).

In addition to its harmful effects on people with tuberculosis, stigmatizing language has clouded the vision of research and programs. Only recently have programs begun to speak of “cascades of care,” a tool borrowed from the world of HIV to illustrate healthcare attrition as patients begin the uncertain journey from diagnosis to cure (13). Seeing tuberculosis patients as responsible for ineffective treatment, relapse, or even reinfection reduces those responsible for care throughout the cascade to just a few actors—principally the patient herself—and absolves governments of their obligations to promote the right to health.

Embracing language that respects the dignity of people with tuberculosis must start in scientific discourse. Academic journals, professional societies, and conference organizers should adopt editorial standards that end the use of stigmatizing tuberculosis terminology and should proactively engage authors to replace these terms during peer and editorial review. Many researchers recognize the need to avoid stigmatizing language but may worry that the alternatives lose the elegance of shorthand. Convenience that encourages stigma and discrimination and removes people with tuberculosis from the center of the response, however, carries too great a cost.

Successful examples of retiring stigmatizing language exist and should be emulated (box). In one example a community representative to the US Department of Health and Human Services’ pediatric antiretroviral guidelines panel worked with panel members to replace the phrase “mother to child transmission” with “perinatal transmission.” (14) This switch maintained the precision required for clear clinical discourse and eliminated the implication that mothers with HIV bear responsibility for transmitting HIV to their infants.

Similar transitions are possible in tuberculosis; in fact, the International Union Against Tuberculosis and Lung Disease recently committed to include guidance on appropriate language in the abstract submission process for its conference. The organization is also pursuing appropriate language guidance for its journals, the International Journal of Tuberculosis and Lung Disease and Public Health Action.

These transitions should become commonplace. Changing community norms about tuberculosis is not easy, but a change in the language used by the scientific and medical communities is a necessary step in the right direction.

Moving to non-stigmatizing terminology in tuberculosis

Click here to read an open letter sent to the Union by civil society organizations calling for the retirement of stigmatizing and criminalizing language from the global TB discourse.