Tuberculosis cases down by 6% in 2013 – pace too slow to reach elimination this century. Rates of MDR-TB remain at very high levels, making the European Region the most affected area of the entire world. 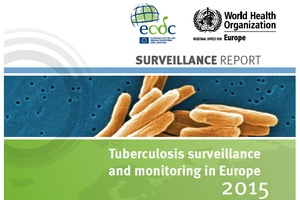 An estimated 360 000 Europeans developed tuberculosis (TB) in 2013 – 1000 people on a daily basis. According to new data published today by the European Centre for Disease Prevention and Control (ECDC) and the WHO Regional Office for Europe, the number of TB cases dropped by about 6% compared to 2012, continuing a sustained decline over the last decade across the Region. But rates of multidrug-resistant (MDR) TB remain at very high levels, particularly in the so-called 18 high-priority countries, which see 85% of all new TB cases in the Region. These countries also account for most of the 38 000 TB-related deaths in 2013.

"MDR-TB is still ravaging the European Region, making it the most affected area of the entire world," says Zsuzsanna Jakab, WHO Regional Director for Europe. "Only 50% of MDR-TB patients are found and half of them successfully cured. This calls for a considerable scaling up of access to safe, rational and efficient new TB drugs, as well as innovations on rapid diagnosis and care centred on the needs of patients. This is what the new global End TB Strategy and the European consolidated action plan advocate for. We work with our countries to improve the quality of and equitable access to their services in line with Health 2020, the European health policy framework. This has resulted in improving the capacity of European countries to detect and treat patients with drug-resistant forms of TB."

The overall trend across the Region is influenced by a marked decline of TB in high-priority countries, whereas in some low-incidence countries within the European Union (EU) and the European Economic Area (EEA) notification rates are going up. Overall in the EU/EEA, around 65 000 TB cases were reported in 2013.

"At the current pace of an annual 6% decline, the EU/EEA will only be free of TB in the next century. In order to achieve elimination by 2050, for example, we would have to cut down cases at least twice as fast," says ECDC Director Marc Sprenger. Despite historically low numbers and a significant decline over the last 10 years, the EU countries are not all progressing in the same way and face specific challenges in their TB control efforts. "Our data show a Europe in need of tailored interventions, which target each country's settings." In most low-incidence countries, rates are stable or going down only very slowly and the majority of patients are of foreign origin. Countries with high incidence overall face higher rates of reinfection and report many more MDR-TB cases.

Both directors agree that the goal to eliminate TB depends on a more efficient use of current tools and interventions, to be complemented by new and more effective ones. The WHO Regional Office for Europe and ECDC will continue to focus on both high-priority countries and countries with comparatively fewer new TB cases. The first Eastern Partnership Ministerial Conference on TB and MDR-TB will be held in Riga, Latvia, on 30–31 March 2015 under the Latvian presidency of the Council of the EU as an opportunity to bridge progress in different parts of Europe and work towards one elimination goal.

• World TB Day is celebrated on 24 March each year around the world. The overall goal of the Day is to raise awareness about the burden of tuberculosis (TB) worldwide and the status of TB prevention and control efforts.

• TB elimination is defined as less than one case of TB disease per 1 million population per year.

• The WHO European Region comprises 53 countries with a population of nearly 900 million people, of which around 508 million live in the EU/EEA (28 EU Member States plus Iceland, Liechtenstein and Norway).

• The WHO Consolidated Action Plan to Prevent and Combat Multidrug- and Extensively Drug-Resistant Tuberculosis in the WHO European Region 2011–2015 aims to strengthen efforts to address the alarming problem of drug-resistant TB in the Region. The Plan was developed in a Region-wide consultation with representatives of the 53 WHO European Member States, experts, patients and communities suffering from the disease.

Tuberculosis surveillance and monitoring in Europe 2015