Community groups sent public comments in support of the addition of rifapentine, delamanid, bedaquiline and linezolid to the WHO Model List of Essential Medicines. 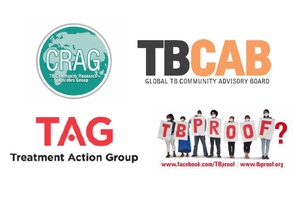 The 20th Expert Committee meeting will take place at WHO Headquarters, Geneva, 20-24 April 2015 in order to revise and update the WHO Model List of Essential Medicines (EML) for both adults and children. Applications for inclusion, change (addition or modification of an indication) or deletion of a medicine in the next EML were sent to the WHO EML Secretariat between 15th June and 1st December 2014.

The TB drugs that are included for consideration are rifapentine, delamanid, bedaquiline, linezolid, and terizidone.

The Global TB Community Advisory Board (TB CAB), the Community Research Advisors Group (CRAG) and Treatment Action Group (TAG) sent public comments in support of the addition of rifapentine, delamanid, bedaquiline and linezolid to the WHO Model List of Essential Medicines.

Referees are producing peer-reviewed reports, and will consider public comments received on applications. Referees' peer review reports will be posted on the website by the end of March 2015, and brought to the attention of the WHO Expert Committee, which at the end of April will meet for plenary discussion and voting.

An overview of the whole 2015 EML process is available for download here: http://www.who.int/medicines/areas/policy/EML.pptx.

On May 8, 2015 WHO published the new edition of its Model List of Essential Medicines. After about 45 years of scarce innovation for TB medicines, 5 new products are included in the List: rifapentine (for latent TB infection only), bedaquiline, delamanid, linezolid and terizidone (as an alternative to cycloserine). To read more, click here.