Second Advisory Committee meeting for the new TB Action Plan of the WHO European Region, 2016–2020

The Joint Tuberculosis, HIV/AIDS and Hepatitis Programme (JTH) held the second meeting of the Advisory Committee for the new TB Action Plan of the WHO European Region, 2016–2020. The meeting was held on Wednesday 4 March 2015 at the Regional Office in Copenhagen, Denmark. The Committee includes representatives from high- and low-TB-incidence countries, patient representatives and key partner organizations, such as the Global Fund to Fight AIDS, Tuberculosis and Malaria (GFATM) and WHO headquarters.The meeting was an important milestone for reviewing the strategic directions, targets and areas of interventions of the new Action Plan, as well as inputs received from the European Technical Advisory Group on Tuberculosis Control (TAG-TB) and the Regional Consultation meetings held at the Regional Office 25-27 November 2014. 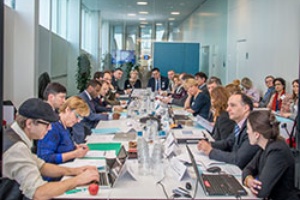 The new TB Action Plan, 2016-2020, will be in line with the global End TB Strategy and the Health 2020 policy framework. Following the guidance and input from the advisory committee, JTH will revise a second draft of the new TB Action Plan, which will then be fine-tuned after an in-house consultation with other programmes and divisions. The new Plan will pay particular attention to Health 2020 as the guiding policy framework to address inequities in TB care.

The next steps include a web-based consultation and an additional consultation with national counterparts and partners at the 13th WHO NTP Managers Meeting/Wolfheze workshops, which will be held 27-29 May 2015.

Once finalized, the Plan will be submitted to the 65th session of the WHO Regional Committee for Europe along with the report of implementation of the Consolidated Action Plan to Prevent and Combat M/XDR-TB.