Medication simplifies and improves treatment for 1 million children with TB; Medicines come in dispersible fixed-dose combinations at the correct dosages, tablets no longer need to be cut or crushed; These products can improve adherence and child survival from TB. 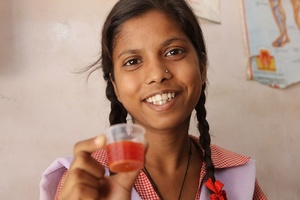 CAPE TOWN (2 December 2015) –TB Alliance and its partners announced today the availability of child-friendly tuberculosis (TB) medicines in the correct doses. The improved treatments are the first to meet the dosage guidelines set by the World Health Organization (WHO) in 2010. They are dispersible and palatable, simple to administer and affordable. The availability of these products is a result of a project largely funded by UNITAID.

According to the WHO, at least 1 million children become ill with TB each year and 140,000 children die of this curable disease. To date, children around the world have not yet had access to appropriate TB medicines.

“The availability of correctly dosed medications will improve treatment for children everywhere,” said Dr. Mel Spigelman, President and CEO of TB Alliance, an international non-profit organization, ahead of the 46th Union World Conference on Lung Health in Cape Town, South Africa. “This is an important step toward ending the neglect that has characterized the care of children with TB for far too long.” TB Alliance has partnered with WHO, UNITAID, USAID, and others in the development and introduction of these products.

TB now ranks as the world’s leading infectious disease killer along with HIV. The disease is curable with treatment, which consists of multiple drugs and must be taken for a minimum of six months. Children need different doses of TB medicines than adults. Today, for parents and care providers to approximate the correct dose for a child, they must crush or chop available drugs, and piece together the treatment regimen. Splitting TB pills, which gives the medication a bitter taste and usually results in imprecise dosing, makes the treatment journey even more difficult for children and their families. Such challenges can also make treatment less effective, leading to poor health outcomes and the development of more difficult to treat drug-resistant TB in children.

“No child should die of TB, yet for too long, we have not had the medicines or the functioning market needed to mount a sustainable response against childhood TB,” said Mr. Lelio Marmora, Executive Director of UNITAID. “UNITAID’s investment in addressing this problem will increase access to correctly dosed, quality-assured, affordable TB medicines for children that will help save lives.”

WHO revised their guidelines for childhood TB treatment in 2010, recognizing that children need higher doses of the medicines than what they were receiving. Lacking incentives and clear market information, companies, however, did not produce any products conforming to the new guidelines.

Over the past three years, TB Alliance has worked with manufacturers to develop properly-formulated TB medicines that are easier to administer in children. In addition to UNITAID, USAID and other funders also provided support for this effort, which included work to address market barriers to ensure new treatments will reach children in need.

“If we are to end the TB epidemic by 2030, we must bring children with TB out of the shadows and ensure they are properly diagnosed, treated and cured,” said Dr. Mario Raviglione, Director of the Global TB Programme at WHO, speaking at the launch. “The new fixed-dose formulations for children will offer hope for the 400 children who needlessly die of TB each day. Urgent action is needed to ensure these medicines reach those in need and rapidly improve child survival from TB.”

The new TB medicines are fixed dose combinations (FDCs) of the three most commonly used drugs to treat drug-sensitive TB (rifampicin, isoniazid, and pyrazinamide). These are not new drugs, but rather improved formulations that are dissolvable and flavored so that they are simple for providers and parents to administer and easy for children to take. The FDCs are rifampicin + isoniazid + pyrazinamide, which is used for the initial two months of treatment, followed by four months of rifampicin + isoniazid. The formulations are in the process of being prequalified by WHO but are now available under the WHO’s Expert Review Panel mechanism.

“My three-year old daughter and my newborn son had TB—they were so sick and it was so difficult to give them the medication that I began to lose hope,” said Monique Davids, a mother and care provider from Cape Town, South Africa. “TB is already such a long struggle for families; with these new simpler medicines, at least the treatment doesn’t have to be such an ordeal anymore.”

TB Alliance is working with WHO, UNICEF, Management Sciences for Health and other organizations to encourage uptake in countries with high TB burdens and to reach children affected by TB at all levels or sectors of healthcare. Initial roll-out of the new medicines is expected in early 2016.

“Childhood TB is a problem that can be solved when we choose to act,” says Dr. Enos Masini, National Tuberculosis Program Manager, Kenya. “We need to make sure all children with TB are diagnosed and treated with the best medicines possible. I’m proud to say Kenya plans to adopt these new products for our children immediately, which will greatly improve our response to treating drug-sensitive TB.”

Tuberculosis is a leading infectious disease killer and is caused by bacteria that spreads through microscopic droplets released into the air when someone with the untreated, active form of tuberculosis coughs or sneezes. Infants and young children are at special risk of having severe, often fatal forms of TB, which can leave them blind, deaf, paralyzed or mentally disabled. At least 1 million children have TB and 400 die each day from the disease. However, almost two-thirds of children thought to have TB are never diagnosed or treated. TB is a family disease that is often passed from parents to their children.

UNITAID is an international organization based in Geneva that is finding new ways with partners to prevent, treat and diagnose HIV/AIDS, tuberculosis and malaria more quickly, more cheaply and more effectively. Its investments help turn ground breaking ideas into effective solutions that enable partners to achieve the highest impact for those in need.