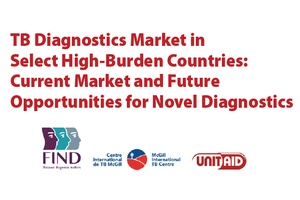 GENEVA, 16 October 2015 – Brazil, China, India and South Africa, which together account for nearly half of all new tuberculosis (TB) cases, offer “tremendous opportunities” for new diagnostics due to their commitment to fight the disease at a time when investments in new technologies are on the increase, according to a new report from FIND, McGill International TB Centre, and UNITAID.

The report, entitled “TB Diagnostics Market in Select High-Burden Countries: Current Market and Future Opportunities for Novel Diagnostics”, noted that there is already a sizeable TB diagnostic market in these four countries.

TB remains one of the world’s deadliest communicable diseases, causing 1.5 million deaths in 2013. An estimated 9.0 million people developed TB in 2013, of which 480 000 cases were resistant to first-line drugs.

Effective new tools are essential for curbing the epidemic – notably reaching the 3 million people each year who do not receive a diagnosis, and informing appropriate treatment.

A recent World Health Organization (WHO) consultation prioritized the most urgent unmet needs, describing high-priority ‘target product profiles’ for new TB diagnostics to be used in the most remote settings:

Recent work sized the current diagnostic market in Brazil, China, India and South Africa. This report went a step further, developing estimates of commercial opportunity for each of the four target product profiles identified above.

The report provides an updated snapshot of the TB testing landscape that has rapidly evolved in the past decade, since a previous global market assessment was made by FIND and the WHO Special Programme for Research and Training in Tropical Diseases (TDR) in 2006.

The potential market in the year 2020 in all four countries for each of the four priority products was estimated to be worth: $48-71 million for the sputum test; $65-97 million for the non-sputum based test; $18-35 million for the triage test; and $59 million for a detection test that allows for follow-on drug susceptibility testing valued at $15 million.

China, India and South Africa have the highest number of TB cases and, together with Brazil, account for 46 percent of all new cases. The report noted key features of each market: the vast majority of TB diagnostics in Brazil and South Africa are used in the public sector, while India has a very significant private sector. In China, most people with presumptive TB seek diagnosis in hospitals.

Countries are in the future likely to adopt a mix of technologies for diagnosing tuberculosis, on the basis of key features, patients’ needs and rates of drug resistance, the report concluded.