Ukraine: Another cost of war: Spread of tuberculosis

DONETSK, Ukraine – While Russia’s war against Ukraine has claimed more than 1,000 lives since April, in addition to at least 363 servicemen, there are other casualties that aren’t getting as much attention. 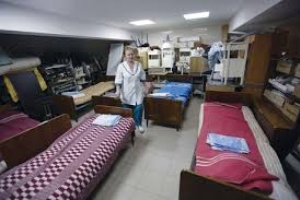 A nurse shows a bomb shelter at Donetsk Regional Tuberculosis Hospital, on June 26.

One of them is worsening public health, specifically a tuberculosis epidemic because of dislocation and stress, interrupted medical treatment and the outdated approach that health officials take to curing the potentially deadly disease.

“We will definitely have an outbreak in prevalence of all forms of TB after all this ends,” predicts Natalia Chursina, deputy head of the Donetsk Regional Tuberculosis Hospital.

“We see all the factors that contribute to an increase in the TB epidemic,” added Andrej Slavuckij, a medical officer for TB with the World Health Organization.

Among those factors that will lead to an upsurge: the dislocation of more than 100,000 people in Donetsk and Luhansk oblasts because of the fighting, inadequate access to some diagnostic centers and interrupted treatment – which can be worse than no treatment at all.

Ever since Russian-backed insurgents seized control of Donetsk in April, the main tuberculosis treatment center in the provincial capital of 1 million people has had TB patients coming and going: Some have arrived there from other war-torn cities in the oblast, such as Kramatorsk. Others have left to safer places such as Kharkiv, Dnipropetrovsk and other cities. Some have abandoned treatment altogether, or had it interrupted.

And still more wonder how long their life-saving medicines will keep coming in a war zone.

Oksana Serduik, another physician in the Donetsk clinic, says that the hospital has enough reserves of medication to last several months, but could face a shortage by the end of the year. Its supply comes from the non-profit International HIV-AIDS Alliance, but with the fighting, it has been too dangerous for suppliers to travel between Kharkiv and Donetsk.

Any interruption of treatment promotes resistance to antibiotics in patients and could trigger multidrug-resistant tuberculosis, or MDR TB, from which only half of patents recover, compared to a recovery rate of 98 percent with treatment for normal bacteria strains.

Why TB surge is expected

By the age of 30, most Ukrainians are infected with mycobacterium tuberculosis, which becomes TB if the immune system falters. Stress, like the kind Ukrainians have been under amid revolution and war, can contribute to the weakening of immune systems.

Even before the conflicts, Ukraine had Europe’s worst rate of TB after Russia, with almost 48,000 people suffering from this disease now and 6,390 who died from it last year, according to official statistics. When the deaths of those who suffered from HIV and TB are taken into account, the death toll goes up by 2,500 people. TB, in fact, is the main cause of death of people with HIV in Ukraine. Still, the World Health Organization estimates that one in four TB patients are not officially registered.

TB has a reputation as a “disease of the poor,” but actually it has spread to others in society, especially those in constant contact with people, such as shop assistants, taxi drivers, medical workers and police officers.

Without treatment, a TB carrier infects up to 15 people per year. The easiest way to catch TB is to spend at least several hours in poorly ventilated room with a TB transmitter. So prison cells have become an ideal environment for spreading the disease, with prevalence among prisoners three times higher than in the rest of the population in Ukraine. Out of nearly 150,000 prisoners in 2012, more than 3,000 were suffering from TB.

Early detection and treatment are essential. Both have been disrupted by Ukraine’s unrest. Moreover, Ukraine’s laws don’t force people to get treated if they refuse. A person who advances to the multi-drug resistant stage of TB must undergo long, painful and more expensive treatment – nearly $50 a day. Some 10,000 such cases are registered.

Serhiy Petruk, 30, quietly sits with IV on a couch in Zhdanivska prison hospital No. 3 in Donetsk Oblast watching other patients swallow their pills for treatment. The medication that he receives helps his liver, which was damaged by treatment of his MDR TB. Petruk, who worked as a miner before being sentenced to prison for stealing a cell phone, was infected with the dangerous strain in prison and then sent to this hospital six months ago.

Zhdanivska prison is the only one in the oblast designated for treatment of convicts with TB. It is equipped with the newest equipment for diagnostics and treatment, courtesy of Doctors Without Borders, an international health organization.

Petruk has two years left in his prison sentence, during which time he hopes to be cured of TB when he returns to his wife in Donetsk Oblast’s Krasnoarmiysk, the scene of fierce fighting between Ukraine forces and Kremlin-backed forces.

Out of 540 convicts who are receiving treatment at this colony, more than half have MDR TB and 102 people suffer from TB and HIV. About 10 people have such a chronic form that they are just receiving palliative care until they die.

Despite the availability of treatment, many convicts with TB refuse to take the pills. “They say that we are conducting experiments on them,” said Ihor Hrytsun, deputy head of the prison on medical issues. “I hear these accusations for about 20 years of my work here.” Others interrupt treatment after their release.

Yaroslav Strelnikov, head of the Variant non-government organization that helps former prisoners make the transition to social life, said that only 3 percent of these people continue treatment. But with the assistance of Variant, more than half of former convicts continue treatment, Strelnikov said.

Andriy, a former convict who refused to give his last name out of fear of stigmatization, said he discontinued treatment after his release from Zhdanivska TB prison several years ago because he felt fine. But then TB led one of his lungs to collapse. “I saw mist in my eyes, felt a high temperature and checked into a hospital,” he said. “So it turned out I was transmitting TB during all this time not being aware of that.”

Lack of access to fresh air and poor nutrition harm a patient’s recovery “They fed me mostly with cabbage, beetroot and carrots,” said Zhdanivska prison inmate Abessalom Gvasalia, 38, who was released in March.

For those who don’t get proper treatment, survival chances fade, said Hrytsun, the prison doctor, adding that often convicts come to them in such grave condition that it’s impossible to save them. Those with TB and HIV are “doomed,” he added.

With the current war in the Donbas, prison administrators often refuse to transport TB convicts to specialized prison hospitals because of fears of attacks on the convoys. On its way to Zhdanivska prison hospital in Khartsyzsk from Donetsk, the Kyiv Post was stopped at checkpoints of armed separatists and thoroughly searched several times.

Ukraine spends billions of hryvnias every year to finance some 20,000 hospital beds for TB patients, medical personnel, equipment and medication. Yet government money is still not enough to treat thousands of people with MDR TB, which is financed by the international Global Fund to Fight AIDS, Tuberculosis and Malaria.

Perhaps aside from prisons, TB dispensaries “are the best place to catch tuberculosis, because TB is there, the windows are closed and people are coughing,” said Nicolas Cantau, Global Fund’s regional manager on Eastern Europe and Central Asia.

Only an estimated 10 to 15 percent of TB patients truly need hospitalization, the WHO’s Slavuckij believes.

“But the system clings to hospital beds,” he said. Because state budgets are tied to numbers of beds, hospital administrators have no incentive to adopt other, more effective forms of treatment.

More effective than hospitalization, TB patients require easy access to quick diagnostics and clinics close to their places of residence or work, where they could receive medication without interrupting their normal lives, Slavuckij said.

He said that government money needs to be allocated on a per-patient and per-service basis, not on a per-bed basis, as it is now.

On June 22, Ukraine applied for a Global Fund grant and hopes to receive $184 million for 2015-2017, some 30 percent of which will go directly for the treatment of TB. While the Global Fund is considering the request, its experts say that, without changes in Ukraine’s diagnostic and treatment approach, the additional money won’t help much.

“If we don’t shut the TB hospitals we will not be able to overcome TB,” Cantau of Global Fund stressed.

Editor's Note: This investigation was conducted by the Objective investigative reporting project in Ukraine, Belarus and Moldova, a Kyiv Post partner. The program is supported by the Ministry of Foreign Affairs of Denmark, and implemented by a joint venture between NIRAS and BBC Media Action.