In 2014, the slogan for World Tuberculosis Day is "Reach the 3 million". 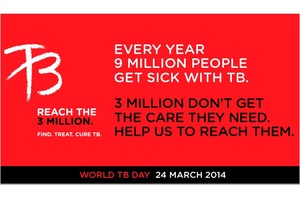 TB is curable, but current efforts to find, treat and cure everyone who gets ill with the disease are not sufficient. Of the 9 million people a year who get sick with TB, a third of them are "missed" by health systems. Many of these 3 million people live in the world’s poorest, most vulnerable communities or are among marginalized populations such as migrant workers, refugees and internally displaced persons, prisoners, indigenous peoples, ethnic minorities and drug users.

WHO and the Stop TB Partnership, hosted at WHO, are together promoting World TB Day. World TB Day provides the opportunity for affected persons and the communities in which they live, governments civil society organizations, health-care providers, and international partners to call for further action to reach the 3 million. All partners can help take forward innovative approaches to ensure that everyone suffering from TB has access to TB diagnosis, treatment and cure.

The burden of tuberculosis

World TB Day is an opportunity to raise awareness about the burden of tuberculosis (TB) worldwide and the status of TB prevention and control efforts. The Day is also an occasion to mobilize political and social commitment for further progress.

Progress towards global targets for reductions in TB cases and deaths in recent years has been impressive: TB mortality has fallen over 45% worldwide since 1990, and incidence is declining. New TB tools such as rapid diagnostics are helping transform response to the disease and new life-saving drugs are being introduced.

But the global burden remains huge and significant challenges persist.