5th December, 2014 - Brasilia, Brazil - Ministers of Health from Brazil, Russia, India, China and South Africa made historic commitments today in the fight against tuberculosis at the BRICS Health Ministers Meeting in Brasilia, Brazil. 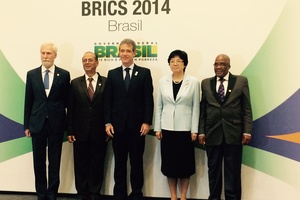 The Ministers approved the development of a cooperation plan that includes a common approach to universal access to first line tuberculosis medicines for all people with TB in BRICS countries, as well as in low- and middle-income countries.

BRICS Ministers agreed that intensified action in their counties was essential to ending TB and agreed to aspire towards a 90-90-90 TB target: 90% of vulnerable groups screened, 90% diagnosed and started on treatment, and 90% treatment success. The target was first suggested by Dr. Aaron Motsoaledi, Chair of the Stop TB Partnership Coordinating Board and Minister of Health for South Africa in October 2014 at the Union Lung Conference in Barcelona.

Ministers also agreed to cooperate on scientific research and innovations on diagnostics and treatment, including drug resistance and service delivery of TB. They identified sharing technologies, identifying manufacturing capacities and TB financing as key priorities.

“The commitments made by BRICS Health Ministers today are a historical moment for TB and for BRICS cooperation on global health. Action in BRICS countries towards reaching, diagnosing and treating all TB cases, including the most vulnerable, is essential if we aspire to a world without TB. BRICS have made it clear that TB has no place in the future they envision for their citizens. The global TB community commends Brazil for the outstanding commitment it has shown. I would also like to thank Minister Motsoaledi for his vision and leadership", said Dr. Lucica Ditiu, Executive Secretary of the Stop TB Partnership.

Ministers approved the establishment of a Working Group to develop an operational framework to advance action on the items agreed at the meeting. BRICS countries currently account for nearly half of all global TB cases and one-third of the global missed TB cases. The Stop TB Partnership and UNAIDS have been working together since 2013 to advance cooperation and action on TB and AIDS in BRICS countries.