Today TB activists interrupted the plenary session at the 45th Conference on Lung Health, calling on the Global Fund and partners to increase the amount of funds allocated to TB without jeopardizing funding to HIV and malaria and other diseases. 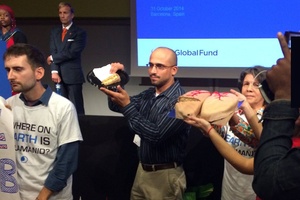 A WHO and Global Fund study revealed that for the period between 2014 and 2016, there will be a funding shortfall for TB activities totaling up to US$ 1.6 billion/year, assuming that US$ 3.2 billion/year will be met through domestic financing. This figure however does not include the US$ 2billion/year needed for R&D investments as recommended by the Stop TB Partnership’s Global Plan to Stop TB, of which only a third is invested each year. Once we include the R&D funding requirements, we arrive at an estimated funding gap of US$ 2.9 billion/year for TB.

In 2013, TB received just 16% of the share out of the three diseases (HIV-60% and malaria-24%) from the Global Fund. The New Funding model covers the years 2014-2016. From the total US$ 14.82 billion (US$ 3.4 billion/year) raised for HIV, TB and malaria over three years, the Global Fund has allocated 18% (US$ 0.9 billion/year) to TB, a marginal increase from the previous 16% ($0.8 billion in 2013). However, for the period between 2014 and 2016, the total amount of funds allocated per year (US$ 5 billion/year) for all three diseases, has decreased from 2013, translating to a marginal increase of funds available for TB. In summary, TB has received a nominal increase of the pie but the pie is much smaller! We need a bigger piece of the pie for TB and a much bigger pie for all three diseases.

In order to eradicate TB, we call on the Global Fund and partners to increase the amount of funds allocated to TB by US$ 2.9 billion/year without jeopardizing funding to HIV and malaria and other diseases. The increase of funds will contribute to ensuring that the current TB tools are used efficiently and effectively to combat TB. In addition, the funds will secure research and development of more efficacious drugs and treatment regimens that are well-tolerated and patient friendly. We anticipate that increased funding will enable the development of rapid and reliable TB diagnostic tools that can easily be used in low resource settings. We hope that the funds will also jump-start TB national programs to collaborate with social welfare departments, so that social enablers are provided during TB treatment, since TB disproportionally affects the poor, who often have limited access to nutritional food, water and transportation, all which are necessary for treatment adherence. We envision the funds will adequately cover access to TB treatment and care for key population groups, including those infected with MDR-TB. If we do not treat all, we cannot end it (TB) all. Selective treatment of patients is a violation of human rights and a burden on the public health system, which should not be tolerated.

We need a revolution in funding to eradicate TB, we urge the Global Fund to rethink its funding allocation to a needs-based allocation as opposed to World Bank economic classification of countries into lower, middle and upper income. Middle-income countries disproportionately bear the burden of TB, are home to large numbers of poor people, and often have health budgets similar to those of low-income countries. The exit of Global Fund from Eastern Europe and Central Asia (due to their middle income status), a region with a high MDR-TB burden will severely affect MDR-TB patients and increase MDR-TB incidence, since country budgets in this region have not increased to fill the Global Fund gap.

We urge the Global Fund to raise more funds for TB and encourage partners including the private sector as well as financial institutions to fund TB. Our message is simple, we want a bigger slice of the pie for TB. But this shouldn’t detract from important work being done on HIV and malaria—instead, we need a bigger pie to fight all three diseases!