Today at the opening plenary of the 45th Conference on Lung Health in Barcelona, activists from across the globe called on governments to dramatically increase spending on R&D for new treatments for TB. Spending must be tripled to meet the US$2 billion annual minimum required according to the Stop TB Partnership’s Global Plan to Stop TB. 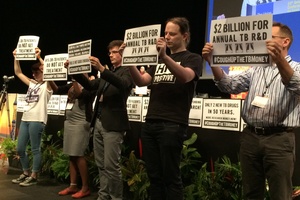 Barcelona, 29 October 2014: Today at the opening plenary of the 45th Conference on Lung Health in Barcelona, activists from across the globe called on governments to dramatically increase spending on research and development (R&D) for new treatments for tuberculosis (TB). Treatment options for people with multidrug-resistant TB (MDR-TB) are particularly challenging. Spending must be tripled to meet the US$2 billion annual minimum required according to the Stop TB Partnership’s Global Plan to Stop TB.

The message was delivered by Portia Serote, a TB survivor from the Treatment Action Campaign in South Africa, and Stephanie A., whose brother has extensively drug-resistant (XDR) TB in the United States and who is struggling to access an experimental new medicine.

“My brother is starting to say, ‘I feel happy to be alive, but what kind of life am I going to live if I can’t hear and walk?” says Stephanie.

Treatment for people with drug-susceptible TB lasts six months and is relatively tolerable. Treatment for people diagnosed with multidrug-resistant TB (MDR-TB) involves taking as many as 14,600 pills (that’s about 20 pills a day) over a two-year period as well as a painful daily injection for the first six months. The treatment often comes with major side effects including nausea, vomiting, hallucinations, diarrhoea, suicidal feelings, and even deafness.

We desperately need investment in new treatments that have fewer and less severe side effects, that require a shorter treatment course, that are easier to take, that are heat-stable, that have long shelf-lives and that do not degrade in humid environments.

Yet, funding for TB R&D has never totaled more than one-third of the US$2 billion annual investment called for by the Stop TB Partnership in its Global Plan to Stop TB, a roadmap of the activities necessary to achieve TB elimination. According to the Global Plan, research spending from 2011–2015 should have totaled $9.8 billion. Halfway through this period the world has spent just $1.99 billion on TB R&D.

“I don’t believe that the governments of the world can’t get together to find two billion dollars,” says Serote. “Governments just don’t care enough about poor people in South Africa or India with multidrug-resistant TB.”

Low levels of funding for TB R&D means that the pace of research is falling far behind the spread of MDR-TB. In the past 40 years, only two drugs have been developed to treat MDR and XDR-TB.

The World Health Organization estimates that in 2013, 480,000 people developed MDR-TB, of which only 97,000 started treatment. That means globally an estimated 80% of those with MDR-TB do not get treatment. Of the 20% that do, only half are cured.

Diagnosis of MDR-TB is also now outstripping our ability to provide treatment: 39,000 people with MDR-TB are on waiting lists with no treatment in sight. While more R&D is crucial, it is also unacceptable that the new drugs that we do have are not getting to people who have no other options left – this is especially true in Eastern European countries like Romania and Moldova.

Given the high TB burden in the BRICS countries, governments in these countries in particular should step up and spend more on researching better treatments for the TB that is killing many thousands of people in their countries. At the same time, there is also a moral imperative on the United States not to decrease their investment in TB R&D, but rather to increase it.

Of the little money that is being spent on TB R&D, 60% comes from public institutions. We are concerned that pharmaceutical companies like Novartis, Pfizer, and AstraZeneca have all stopped researching new TB treatments. Unfortunately, much of the expertise required to accelerate TB research is locked up inside companies like these. We call on the private sector to invest in and to collaborate on TB R&D.

We call for tripling of annual global TB R&D funding so as to meet the $2 billion minimum required according to the Stop TB Partnership’s Global Plan to Stop TB. Failure to meet this modest target will result in the continued suffering and deaths of hundreds of thousands of people.

Visit our Facebook page to see photos from #CoughUpTheTBMoney action.