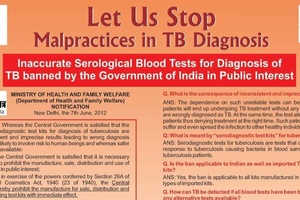 One is called “Gold.” Another is called “Platinum”. But tuberculosis community advocates have other words for these tests, designed to detect latent tuberculosis, but marketed instead to detect active illness: worthless, unreliable, and ultimately, harmful.

After the World Health Organization discouraged the use of IGRAs for active TB diagnosis in low and middle income countries last year, the Indian government banned their use, citing inconsistent and imprecise results despite high claims of accuracy.

In a letter to Immunoshop, which produces TB Platinum, TAG and TBCAB pointed out that the marketing of the product is blatantly misleading and inconsistent with WHO and Indian policy, with advertisements claiming “Immucheck TB Platinum – The IGRA test method will be a boon for detection of active TB and LTBI [latent TB infection] and thus for containment of its transmission!!!!!”

The letter continues, “We urge you to market your test as the label indicates and take action to stop the unethical, off-label use and advertising of the TB Platinum test for active TB.  This is not only relevant for Indian but also for other high TB burden countries.”

In a letter to Dutch manufacturer Qiagen, which markets TB Gold as an active TB test in India, the groups cited concern about the test being used to diagnose active TB in private clinics in South Africa as well.

With more than 40 percent of the Indian population estimated to be infected with latent TB, tests like these pose a huge threat to TB control in one of the world’s highest TB burden countries as well as others.