Geneva, 18 March 2013 – During a meeting with Philippe Douste-Blazy, Chair of the Executive Board of UNITAID and Special Advisor to the Secretary General of the United Nations on Innovative Financing for Development, and a representative of the African Leaders Malaria Alliance, the administration of the Minister of Finance, Mozambique, confirmed the country’s commitment to implement both a small levy on air ticket sales and financial transactions to raise additional funding to fight HIV/AIDS, tuberculosis and malaria. Mozambique will become the seventh African country to implement the air ticket levy for such a cause, following Cameroon, Congo,  Madagascar, Mali, Mauritius and Niger. 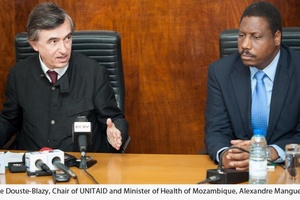 The air ticket levy initiative was set up by President Jacques Chirac and the French government in 2006 and has since then raised over one billion euros in France alone. The majority of the funds have gone to fight HIV/AIDS, malaria and tuberculosis through the global health initiative UNITAID.

Contributions through innovative financing and multi-year donations have already enabled UNITAID to invest in projects in 94 countries including over USD 40 million for projects in Mozambique. As a result 25,000 children today in the country are being supplied with quality-assured, adapted HIV treatment with this number expected to reach 40,000 by the end of the year, as well as the distribution of over 10 million malaria treatments.

“We are delighted with Mozambique’s commitment and its recognition of the potential innovative financing has to raise additional funding for health,” said Mr Douste-Blazy. “With Africa’s continuing economic growth, such solutions for sustainable financing are going to be increasingly important and we hope other countries will follow Mozambique’s example.”

During Mr Douste-Blazy’s most recent visit to Mozambique on 12 March, new projects were launched for HIV/AIDS and tuberculosis diagnostics. Rapid diagnostic machines will be rolled out with UNITAID funding by the Clinton Health Access Initiative and UNICEF, to bring vital HIV monitoring services to the most remote regions of the country.