In TB fight, children must be a priority – World TB Day March 24 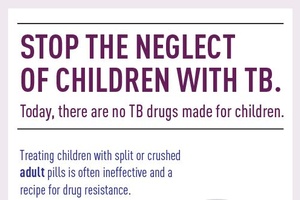 18 March 2013. In spite of an estimated 500,000 new annual cases of children with tuberculosis (TB), there are no appropriate medicines for them, UNITAID and the TB Alliance warn. TB, one of the world’s most neglected diseases with almost no new treatments developed in the past 50 years, is one of the top ten causes of childhood death. TB mostly affects the world’s poorest; among those, the most vulnerable are children.

With no alternatives available, treatment providers for children are forced to adapt medicines for adults as best they can, such as by cutting pills. This leads to improper treatment, treatment failure, spread of this highly-contagious disease, and conditions ripe for the development of drug-resistant strains of the bacteria which causes the disease.

In response to this need, UNITAID is funding a TB Alliance project to develop a correctly-dosed child-friendly first-line TB treatment which is expected to be available within three years. This work will also help speed the development of other regimens for children that are now in the pipeline.

“Despite the world’s capabilities to address this disease, paediatric tuberculosis has been ignored for far too long, resulting in a complete lack of appropriate medicines,” said Denis Broun, Executive Director of UNITAID. “This project is designed to spur innovation so that the right kinds of treatments are available as quickly as possible and at affordable prices. We now need other global players to also step up, especially for identifying those children affected.”

The extent of the childhood TB pandemic is not fully understood. Most experts believe that TB in children goes largely undiagnosed and that the true scope of the problem is far higher than the estimates today.

“Developing treatments for children with TB is an urgent humanitarian imperative,” said Mel Spigelman, M.D., President and CEO of TB Alliance. “An appropriate formulation for the decades-old drugs is not even available. We need to immediately rectify the situation for the present drugs, and also ensure that the improved treatments in the pipeline will be developed for children soon after they are approved for adults.”

In 2010, the World Health Organization released new guidelines for paediatric medications. However, to date, no quality-assured products have been produced to these specifications.

World TB Day, March 24, commemorates the day in 1882 that Robert Koch discovered the tubercle bacillus, the bacteria responsible for tuberculosis. Since that discovery, progress against the disease has surged and ebbed. Now with outbreaks of more deadly forms of TB, documented around the world, it’s time to help protect children from this disease.